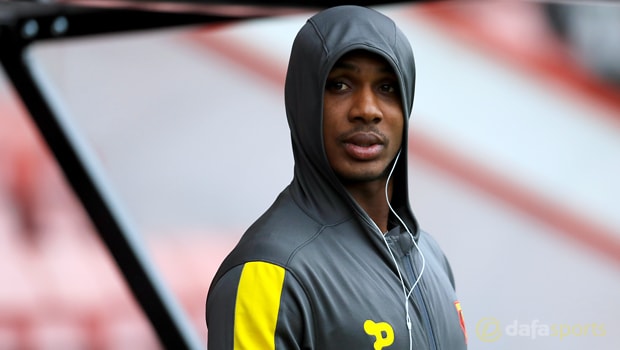 The Nigeria international left Vicarage Road for a reported £20million earlier this week, bringing to an end his two-and-a-half year spell with the Hornets.

The 27-year-old, who scored 39 goals in 100 appearances for Watford, will earn a reported £190,000-a-week in the Far East, but he insists his initial priority was to remain in England.

He told The Sun: “When the options came, my priority was to stay in England.”

Both West Brom and Crystal Palace were interested in signing the former Udinese player during the transfer window, but according to Ighalo they were both priced out of a potential move.

He continued: “West Brom came but what Watford wanted made it impossible to go there.

Crystal Palace, too, showed strong interest but Watford’s demands put them off as well. It was only China that could give them what they wanted.

“On a personal level, it is good money for me but if I had my way I would love to stay in the Premier League.”

Watford have performed well in Ighalo’s absence, recording back-to-back victories against Arsenal and Burnley to move back into the top ten of the Premier League standings.

The Hornets are now ten points clear of the bottom three and they are only an outside bet at 21.00 to be relegated come the end of the campaign.