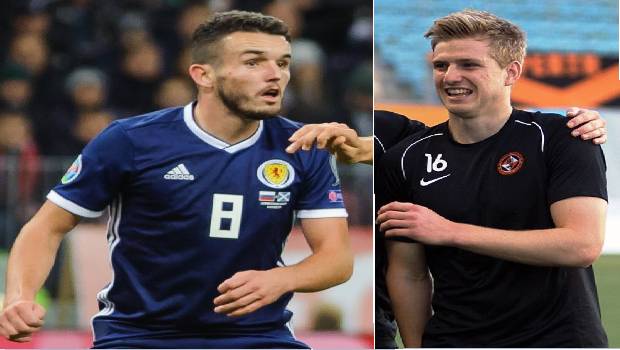 John McGinn scores first-half hat-trick helps over Scotland win in Sunday’s European Qualifier at a sodden Hampden Park. After a crushing defeat to Russia on Thursday, Steve Clarke’s side were under pressure to sweep aside the word’s lowest-ranked side and McGinn had them on course by the interval (12, 27, 45+1) with his first international treble.

The game deteriorated in the second half on a waterlogged pitch but Scotland, who must rely on coming through the play-offs next March to reach the Euro 2020 finals, continued to seek further reward and after Lawrence Shankland scored his first international goal (65), Stuart Findlay did the same (67).Stuart Armstrong added further gloss to the scoreline with a superb late free-kick (87) after a misunderstanding as a dead-rubber game at least provided Clarke’s side – now fourth in Group I – with an overdue morale boost.

In front of a paltry crowd, amid constant rain, the home side forced two corners in the first two minutes before San Marino goalkeeper Aldo Simoncini brilliantly saved Shankland’s close-range strike for another corner which came to nothing.

In any case, in the twelfth moment, the attendant was beaten when McGinn got the smallest of addresses Ryan Christie’s cross, the ball going in off the post. The Aston Villa midfielder’s objective facilitated the nerves and however Simoncini denied James Forrest from range, he could just repel a Scott McTominay cross that permitted McGinn to jump once more.

It was full scale guard for San Marino as the downpour kept on pouring. The meeting goalkeeper held the shortfall down again when he hindered McTominay’s side-footed exertion yet just before the interim.

The fixture was in danger of descending into farce, but Scotland were eager to extend their lead further and in the 65th minute, Dundee United striker Shankland got his first international goal after McTominay’s 20-yard effort rebounded off the bar and into his path.

After two minutes, Kilmarnock protector Findlay went with the same pattern when he headed in a Christie corner and there was the ideal opportunity for a 6th, yet in strange conditions. The San Marino goalkeeper lifted the ball up outside his crate, thinking Shankland had been messed further up the pitch, however with play waved on, he was punished rather and notwithstanding San Marino claims for the ball back, demonstrated no such liberality and twisted into the top corner.