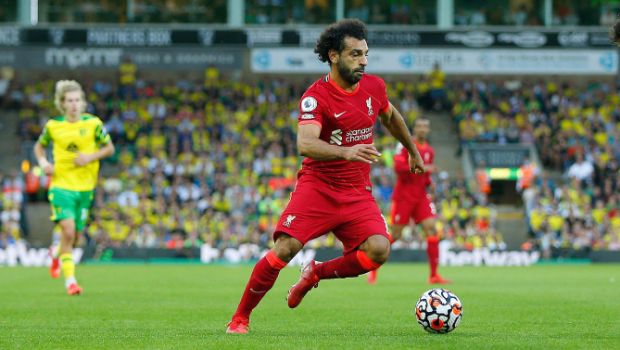 Liverpool taught Manchester United a football lesson and blew away their old rivals with a convincing 4-0 victory at Anfield. Liverpool has returned to the top of the Premier League after thrashing Manchester United. The Reds are now two points above Manchester City as the title battle heats up. Liverpool’s star striker Mohamed Salah scored twice while Sadio Mane and Luis Diaz scored a goal each to register a remarkable win over their arch-rivals.

Both teams looked to start well and play with confidence. Though Manchester United enjoyed proper possession at the start, it was Luis Diaz who gave Liverpool an early fifth-minute lead. The Colombian winger tapped in from close range after Mane set Mohamed Salah free down the right. The Egyptian delivered a pinpoint low cross for a simple and smooth finish.

The Anfield crowd was on their feet in the seventh minute to show their support for United’s star player Cristiano Ronaldo, who has left out of the squad following the death of his newborn son on Monday.

Manchester United’s problems got worse in the 10th minute when Paul Pogba picked up an injury and went out of the field. Ralf Rangnick’s men struggled to get any foothold in the game. The Visitors had three players in front, but their pressing was too blunt to cause any discomfort for Liverpool as the Reds kept on attacking again and again.

It was no surprise when the Reds doubled their advantage. Mane again provided the spark with a superb first-time pass finding the right person Salah. Salah cut in from the right and produced his trademark left-foot finish to make it 2-0. Salah snapped an eight-game scoreless streak with his first goal of the night.

Manchester United failed to register a single shot in the first half of the play. However, the visitors looked better after half-time, but Liverpool came to life when Diaz set up Mane for a clinical first-time finish to put the home side three goals to the good.
Mane and Salah paired up again at the edge of the penalty box to find the net once again, but United’s defenders somehow cleared the ball away. Salah added further gloss to the score sheet when he received the ball from Robertson and chipped it over De Gea’s head.

It was a miserable night for Manchester United who is now without a win in their last eight league matches with Liverpool. United dropped below Arsenal on goal difference and fell to sixth place in the table.