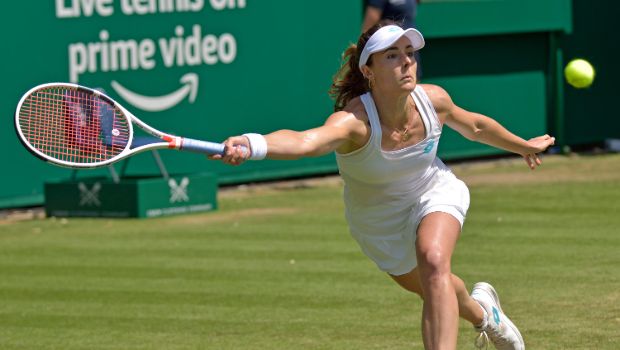 The French player showed sheer dominance to beat the 2020 Australian Open runner-up 6-3, 6-3 and reached the third round for the sixth time. Cornet took a 3-2 lead in their head-to-head meetings. It was an immaculate display by the 31-year-old player. Cornet was aggressive and never faced a breakpoint in the battle which lasted for 87-minutes. Cornet won 83 percent of her first-service points to ease through the contest.

Cornet got off to a rapid start, holding 40-0 leads in each of Muguruza’s first two service games. Cornet remained unruffled when Muguruza saved two set points at 5-2. Cornet looked calm and served out to grab the one-set advantage. But the WTA Finals champion Muguruza was unglued by miscues.

While the Frenchwoman made only 16 unforced errors, Muguruza lost her momentum and had 33 unforced errors, a double of the winner. Cornet fired a wicked passing shot winner to earn the first break when it was 2-2 in the second set. Cornet broke Muguruza initially in the final game of the match and knocked her out of the tournament.

The Danish player Tauson shocked Kontaveit in straight sets 6-2, 6-4 and sealed a spot in the third round of a Grand Slam for the first time in her career. It was a huge defeat for the 2020 Australian Open quarterfinalist after battling it for an hour and 19 minutes. A loss against the 19-year-old will quell Kontaveit’s incredible rise in recent times. The Estonian player cracked into the top 10 by winning 28 of her last 32 matches in 2021.

While the hard-hitting teenager fired 20 winners with 13 unforced errors, Kontaveit managed 15 winners and made 27 unforced errors. Tauson broke Kontaveit in the first game and used heavy service returns to take a 5-2 lead with ease. Tauson sealed the first set with a backhand winner.

However, Kontaveit came closer in the second set as both the players traded breaks to reach 4-4. But a wide forehand by Kontaveit allowed Tauson to earn her third breakpoint. Tauson secured the win after a forehand miscue from Kontaveit.