Zimbabwe produced a massive upset, beating Pakistan by one run in a nail-biting thriller 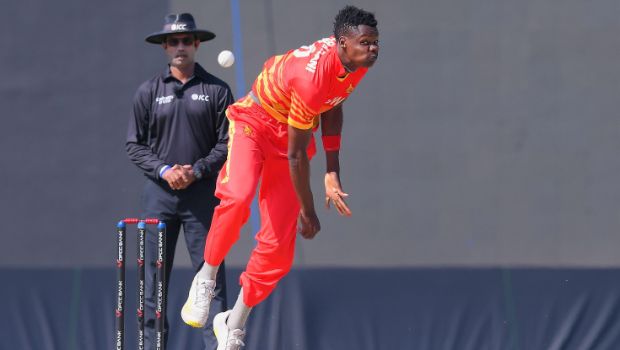 Zimbabwe punched above their weight and stunned Pakistan by 1 run in a low-scoring T20 World Cup thriller at Optus Stadium on Thursday. An all-round disciplined bowling effort from Zimbabwe bowlers helped their side to beat Pakistan in an edge-on-the-seat nail-bitter in Perth. Defending a modest 131, Zimbabwe stifled the Pakistani batters and picked up wickets at regular intervals to stop their fancied rivals at 129/8 in 20 overs. Sikandar Raza emerged as the standout blower and turned the match on its head in the middle overs with brilliant figures of 3/25 in his four overs.

Zimbabwe pacers stood up to the occasion and bowled tight lines toward the end to secure an incredible win. Right-arm pacer Brad Evans bagged two wickets, while Blessing Muzarabani and Luke Jongwe picked up one each. Zimbabwe registered its first win from two matches. Earlier in the day, Mohammad Wasim scalped four wickets and Shadab picked three to restrict Zimbabwe to 130/8 in 20 overs. Sean Williams top-scored with a knock of 31-runs.

This defeat is a strong blow to Pakistan, who are yet to open their account at the showpiece event. From here on, Pakistan might find it more difficult to reach the semifinals. For the second time in the tournament, Pakistan star openers Mohammad Rizwan and Babar Azam failed to provide a good start. Skipper Babar (4) looked tentative before he was squared up by a seaming fuller-length delivery from Evans.

An over later, Rizwan (14) played onto the stumps while trying to cut a ball. Iftikhar Ahmed (5) did not last long either, leaving Pakistan reeling at 36/3 in 7.4 overs. But Shan Masood held one end up and together with Shadab Khan, shared 52 runs for the fourth wicket to take Pakistan forward.

However, leg-spinner Raza had other plans and brought Zimbabwe back into the contest by picking up two wickets in two deliveries in the 14th over. The best moment came in Raza’s next over when he got the wicket of Masood (44), who was brilliantly stumped by Regis Chakabva.
But Mohammad Nawaz (22) kept Pakistan in the hunt and brought down the equation to 11 in the final over. Evans bowled brilliantly to dismiss Nawaz in the penultimate ball to bring down the equation to three runs from the final delivery.

Shaheen Afridi, though, was run out as Pakistan went for a non-existent second run in an attempt to tie the scores, handing Zimbabwe a famous win.