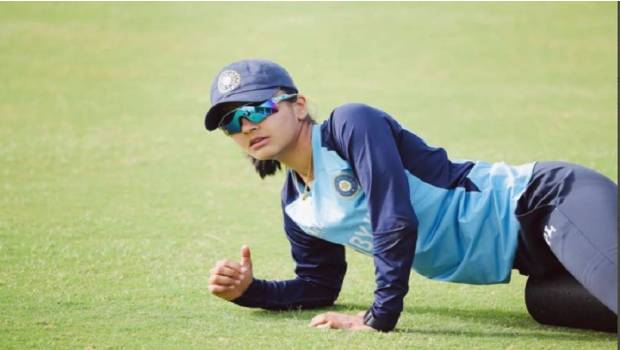 Indian young Women cricketer Harlen Deol took a stunning catch against England in the first T20I of the three-match series. Harlen Deol enthralled the cricket fans and experts with her sensational catch to dismiss Amy Jones. Amy Jones went for a heave-off pacer Shikha Pandey, it looked like the ball might go for a six but Harlen showed all her athletic abilities to grab it. Harlen is an attacking right-hand batswoman who rarely bowls right-arm leg-spin.

The 23-year-old Harlen, positioned at the long-off boundary, timed her jump perfectly and stretched full length to take a reverse-cupped catch above her head. As the momentum made her cross the boundary ropes, Harlen showed her presence of mind, threw the ball in the air, and again dived inside the playing field to complete the catch. This catch is seen as one of the best catches ever taken in Women’s cricket.

Harlen was quickly surrounded by her stunned teammates with joy while England players also applauded and acknowledged the Indian’s effort. However, the match did not go in India’s way as rain interrupted. England won the match by 18 runs (DLS method).

Yuvraj's Savage Response to Sanjay Manjrekar's Retirement Wish is Out of the Park
India beat South Africa in a high-scoring game to clinch the series
India clinches a thrilling 5-run win over Bangladesh, inch closer to the semis