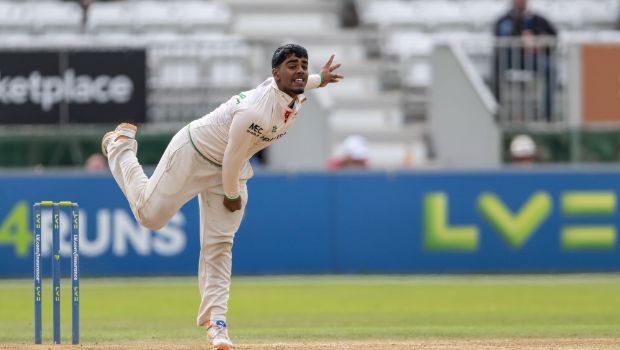 England’s spinner Rehan Ahmed registered a five-wicket haul on his Test debut in the final Test of the three-match series against Pakistan. At 18 years and 126 days, Rehan became the youngest bowler in men’s Test history to take a five-wicket haul on debut. The teenager surpassed the record held by Australian pacer Pat Cummins when he picked up his fifth wicket on Day 3 of the Karachi Test. Cummins was 18 years, and 193 days old when he recorded his bowling figures of 6/79 against South Africa back in 2011.

Pakistan captain Babar Azam and Saud Shakeel were batting well and put up a fine 110 runs partnership to boost their side’s total. But Rehan produced a breakthrough and turned things in England’s favor by scalping the wickets of Azam (54), Mohammad Rizwan (7), and Shakeel (53) in a six-over stretch. Azam made an uncharacteristic misjudgment, soon after he reached 1,000 Test runs for the year.

The teenage spinner then picked up the wickets of Mohammad Wasim (2) and Agha Salman (21) to finish with 5/48. England bowled out Pakistan for 216 in their second innings, setting a target of 167 to win the final Test and whitewash the series. Rehan became the 53rd England bowler to take a five-wicket haul on Test debut, a feat that off-spinner Will Jacks achieved earlier in this series.

However, Rehan’s age made him the youngest to the feat on his Test debut. Earlier, Rehan also became England’s youngest Test debutant when he was handed a cap to play in the third Test. Earlier this year, Rehan impressed in the ICC U19 World Cup as England’s second-highest wicket-taker with 12 scalps in four matches at an average of 12.58.

England in response had a good start as openers Zak Crawley and Ben Duckett added 87 runs for the first wicket. But Abrar Ahmed dismissed Crawley (41) and Rehan (10) in consecutive overs to give some positive hopes for his side. Duckett remained unbeaten on 50 and skipper Ben Stokes on 10 as England finished 112/2 at stumps. England needs just 55 runs to inflict a first-ever whitewash on Pakistan on home ground.

Earlier in the day, Pakistan top-order stalwart Azhar Ali was denied a fairytale ending to his career that has spanned 97 Tests and 7,142 runs. Jack Leach bowled him out for a duck and Azhar walked off the field for the last time.

IND vs ENG, 1st Test, Day 2: KL Rahul, James Anderson shine on a Rain-hit day
ICC World Cup 2019: How the Indian top-order has fared as compared to other teams
Unhappy with the way I was dismissed, Shreyas Iyer opens up