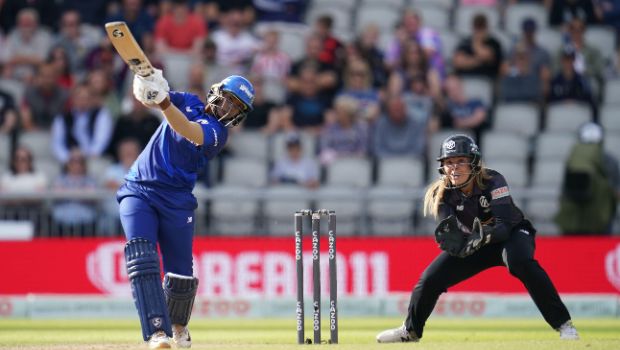 Indian women suffered a crushing defeat against Australian women in the final T20I match at Brabourne Stadium, going down 1-4 in the five-match series. Though India lost the series, the women in blue have put up a strong fight in every game to showcase their talent. Chasing an above-par target of 197, Indian batters never found their rhythm going and managed to score 142 in 20 overs, losing by 54 runs.

After opting to bowl first, India had a good start as Anjali Sarvani cleaned up Beth Mooney (2) very early. Deepti Sharma then dismissed Phoebe Litchfield (11) to put more pressure on the mighty Australians. Very soon, captain Tahlia McGrath walked back after scoring a 26. Devika Vaidya then bagged Ellyse Perry for 18.

It looked as if the Indian women would bowl out Australia for an average total. But Ashleigh Gardner (66*) and Grace Harris (64*) changed the course of the game with a superb partnership of 129 runs for the fifth wicket. Both batters hit brilliant half-centuries and guided their side to a mammoth total of 196/4 in 20 overs.

India in response had a poor start as star opener Smriti Mandhana departed for just 4 in the first over. Gardner then removed Shafali Verma (13) to slow down the scoring rate. McGrath produced a brilliant run out to dismiss Harleen Deol for 24. Deepti (53) fought a lone battle with an excellent half-century but India kept losing wickets at the other end and eventually lost the game. Heather Graham claimed a hattrick while player of the series Gardner picked up two wickets.