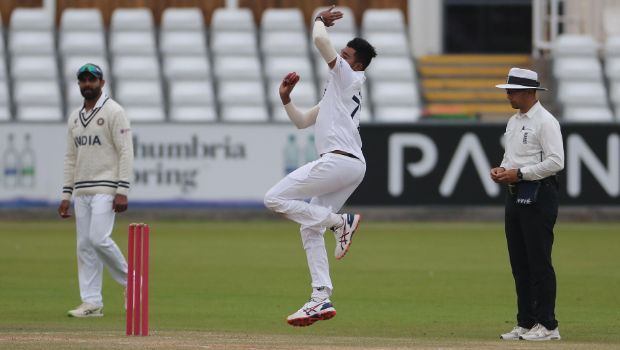 The Third and final T20I between India and New Zealand, which was hampered by rain, ended in a tie on the DLS method at McLean Park. With this, Men in Blue clinched the three-match series 1-0 against the Black Caps. Chasing a par total of 161, India was in a difficult situation at 75/4 after 9 overs when rain interrupted and stopped the play in Napier. As per DLS, both the teams were at par score.

Batting first, the hosts lost Finn Allen early for just 3 in the second over. Devon Conway and Mark Chapman, who came in as Kane Williamson’s replacement, steadied things before Mohammed Siraj dismissed Chapman for 12. Conway and Glenn Phillips stitched a crucial partnership of 86 runs for the third wicket to rebuild the New Zealand innings.

Both batters played beautifully to hit their half-centuries. However, Siraj gave the breakthrough by removing Phillips for 54. Arshdeep Singh then bagged Conway (59), who crafted a fine inning. From there on, the Kiwis lost wickets in quick succession. Siraj and Arshdeep produced sensational bowling performances and scalped four wickets each to bowl out New Zealand for 160.

India in response lost three early wickets inside the powerplay overs. Ishan Kishan fell for 10, while Tim Southee scalped two wickets in one over. He removed Rishabh Pant for 11 before dismissing Shreyas Iyer for a golden duck. Suryakumar Yadav then departed for 13. Skipper Hardik Pandya played an unbeaten cameo of 30 to keep the scoreboard ticking while Deepak Hooda remained unbeaten on 9.