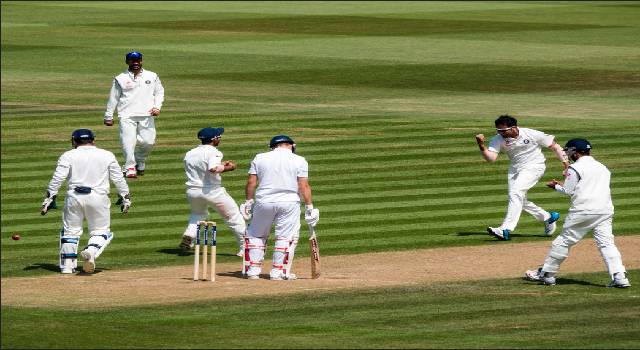 On his test debut as an opener Rohit Sharma scored an absorbing century as India reached a score of 202 for the loss of no wicket, when rain prevented any play on the final session on day 1 of the opening test against South Africa on Wednesday. This would be Rohit Sharma’s fourth Test hundred.

Other than the opening two ball duck when he played against South Africa last week for Indian Board President’s XI Rohit Sharma had never even opened for any domestic first-class cricket.

After duly analyzing the ground surface, his first big stroke was smashing Maharaj long-on whilst stepping out of the crease. Piedt was similarly smashed shot a little later.

Winning the toss Virat Kohli the Indian Captain had opted to bat in the series opening Test with the South Africans at Vizag.

For the South Africans the pick of bowling attack was Kagiso Rabada who had managed to ball an impressive five maiden out of a total of 13 overs that he had bowled on day 1 of the Test series.

Rain being predicted for the coming four days in Vizag could play spoil sport for the remaining days for the 1st Test series.

Earlier in the day after winning the toss, speaking to reporters the Indian Captain had said,”He’s excited to get the role clarity. This a great opportunity for opener Rohit Sharma,” Indian cricket team Captain Kohli said at the toss.

Dhoni decides to delay his trip to Ranchi until he makes sure every CSK member leaves for their home
एशिया कप 2018 : क्रिकेट जगत की प्रतिक्रियाएं
Australia Reach World Cup 2019 Semis With 64-Run Win Against England