ICC World Cup 2019: How will the Windies deal with India’s three batting stalwarts? 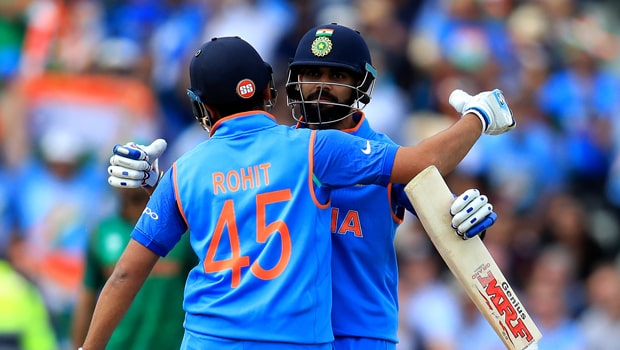 There is no doubt that the Indian bowling unit is one of the finest featuring in the ongoing World Cup. The Windies would be wary of them when they go up against India on Thursday (June 27, 2019). Their batsmen will need to step up and put their best foot forward in order to deal with such a lethal bowling attack. However, that is not the only problem the Windies would need to deal with.

More brutality awaits them as the Windies bowlers will be on the line of fire as well. The three Indian batting stalwarts, Rohit Sharma, Virat Kohli and MS Dhoni, have an experience of playing in 26, 32 and 38 ODIs against the Windies respectively and their record tells that they are waiting to feast on the Caribbean bowling attack.

Rohit Sharma has already been in a superb run of form in this tournament having scored 320 runs in four innings at a whopping average of 106.66. These runs include two centuries as well and if his ODI numbers against the Windies—1219 runs at an average of 64.15—are anything to go by, there are high chances of witnessing yet another three-figure knock from Sharma in the match on Thursday.

Not only Sharma, Kohli is also gearing up for yet another big knock against the Caribbean nation. Kohli already has 241 runs in this competition at an average of 61.00 and he looks all set to take his game a notch higher when he takes on the Windies against whom he has 1840 ODI runs at a mammoth average of 70.76. Not only that, these runs consist of 16 scores of fifty-plus, seven of which are centuries.

If Kohli and Sharma’s exploits aren’t enough, and even if the Windies find a way to send them back to the pavilion early in the match, they will still have to deal with MS Dhoni, who has been equally brutal in ODIs against them. In 38 matches against the Windies, Dhoni has 949 runs at an excellent average of 52.72. Although he doesn’t have a century against them, he has seven scores of fifty or more.

The average and consistency of the trio is not the only astonishing thing against this Caribbean side. If we take a look at their scoring rates, all three of Sharma (90.76), Kohli (96.63) and Dhoni (90.43) have strike-rates of above 90. Most of the Windies bowlers have been conceding runs at an economy rate of over 6 in this tournament. Although the likes of Sheldon Cottrell, Andre Russell and Kemar Roach are exceptions, Roach and Russell have been in and out of the side with injuries. Hence, they will have a pretty hard time in dealing with India’s three batting stalwarts if they don’t find a way of getting rid of them quickly.