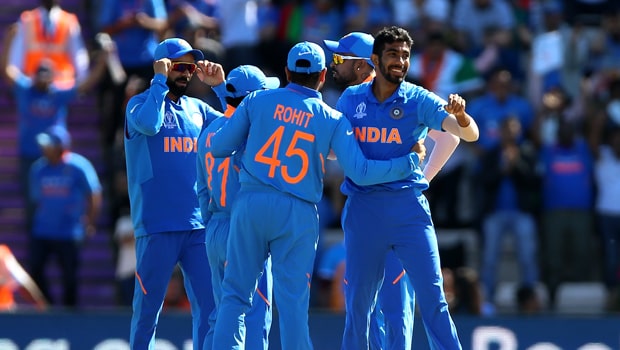 All teams have played at least five matches in ICC World Cup 2019 till now and only two teams, India and New Zealand, are unbeaten so far. Apart from the previous match against Afghanistan, and the washed out game against New Zealand, India have dominated their opposition in each and every game. Their World Cup debutants have played a key role in all these matches. So, let’s have a look at how they have fared so far.

Jasprit Bumrah: Just like the way he played a key role in Mumbai’s title triumph in the Indian T20 League this year, Bumrah has been pivotal to India’s World Cup campaign as well. He has picked up seven wickets in four matches at an excellent average and economy rate of 26.71 and 4.92 respectively. He was even adjudged the Man of the Match for his match-winning spell of 10-1-39-2 in the previous game against Afghanistan.

Bhuvneshwar Kumar: The right-arm pacer started off well with bowling figures of 2/44 in India’s tournament opener against South Africa, and followed that up with yet another fantastic spell of 10-0-50-3 versus Australia until a hamstring injury saw him hobbling off the field in the next match against Pakistan. He has missed two matches since then. However, he is expected to make a comeback in the match against West Indies on Thursday.

Hardik Pandya: The Indian all-rounder came into the World Cup on the back of a successful Indian T20 League campaign with Mumbai, during which he scored 402 runs at an average of 44.66 and also took 14 wickets at a strike-rate of 18.21. He didn’t get off to the best of starts in this tournament as far as his all-round skills are concerned but he has really stepped up in the last couple of matches with this performances. After his cameo of 48 runs off just 27 balls against Australia, Pandya came up with brilliant bowling performances of 2/44 and 2/51 against Pakistan and Afghanistan respectively.

Yuzvendra Chahal: He started off with a fabulous spell of 10-0-51-4 in their tournament opener against South Africa and is also India’s highest wicket-taker at the moment with a tally of eight wickets at an average of 25.25 and an economy rate of 5.45. He has bossed the middle-order for India in every game and has provided them with much needed breakthroughs almost every time.

Vijay Shankar: He walked into the side in the match against Pakistan as a replacement for the injured Shikhar Dhawan and went on to play a far more important role. When Bhuvneshwar Kumar hobbled off the field in the same much with a hamstring injury, it was Shankar who stepped up with a brilliant spell of 5.2-0-22-2. He has made crucial contributions of 15* and 29 with the bat as well, and India are blessed to have such a utilitarian choice in him.

KL Rahul: The right-handed batsman started the tournament at No. 4 for India and made contributions of 26 and 11* in the first couple of matches. However, with Shikhar Dhawan ruled out with injury, he was subsequently pushed up to open the innings. He has come up with scores of 57 and 30 in the last two innings against Pakistan and Afghanistan respectively, and now averages a healthy 41.33 with a tally of 124 runs in four innings.

Kedar Jadhav: He hasn’t had the opportunity of doing much in the tournament but came up with a mature and composed knock of 52 off 67 deliveries when India looked to be in trouble in the previous match against Afghanistan. He has batted in a total of three innings returning with scores of 0*, 9* and 52, and, hence, averages 61 with the bat. In terms of bowling, he has rolled his arm over for just five overs in the tournament, conceding runs at an economy rate of 6.00.

Kuldeep Yadav: He has recorded a bowling average of 57.33 and strike-rate of 76 so far. However, he has bowled much better than what those figures suggest. He was particularly exceptional in the match against Pakistan when he registered a spell of 9-1-32-2, and also bowled well against South Africa having registered bowling figures of 1/46. Although he went wicketless in the matches against Australia and Afghanistan, he ensured that he kept the run-flow in check. An overall economy rate of 4.52 in the competition so far suggests how well he has bowled.