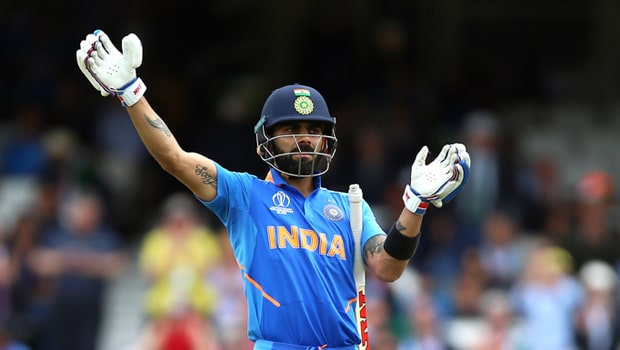 After getting dismissed cheaply in India’s tournament opener against South Africa, skipper Virat Kohli brought his World Cup 2019 campaign back on track with a well paced knock of 82 runs off just 77 deliveries in India’s 36-run victory over Australia. And he would be eager to kick on and get his first three-figure score in the tournament when India take on New Zealand at Trent Bridge on Thursday (June 13, 2019).

There is no doubt about how good a player Kohli is as summed up by his outstanding overall ODI average of 59.47. However, it shoots up to a mind-boggling figure of 68.52 when he faces the Kiwi bowling attack. In 22 matches against them, Kohli has a total of 1302 runs, which includes five centuries and seven half-centuries, along with a best of an unbeaten 154. His strike-rate of 96.44 against New Zealand is also better than his career ODI strike-rate of 92.93.

He has a pretty good ODI record against all three of New Zealand’s frontline seamers. While Trent Boult and Lockie Ferguson have dismissed him twice and once each respectively, Kohli has a strike-rate of over 100 against both of them. And if his head-to-head statistics with Matt Henry is considered, it will be observed that Henry hasn’t been able to dismiss Kohli even once in the 38 deliveries he has bowled to him. In fact, Kohli has taken 35 runs off those deliveries at a healthy strike-rate of 92.11.

So, none of the Kiwi bowlers have really been able to trouble him. Although his strike-rate decreases a lot against Mitchell Santner as compared to the others, just one dismissal in a total of 186 deliveries sums up how Kohli nullifies Santner’s wicket-taking threat. Hence, all these numbers and facts hint towards a big score for Kohli in the next match.

England announces a 30-man training squad for the Test against West Indies
Team India is still looking for MS Dhoni's replacement
He is in good rythm: Dinesh Karthik suggests changes in India XI For 2nd T20I