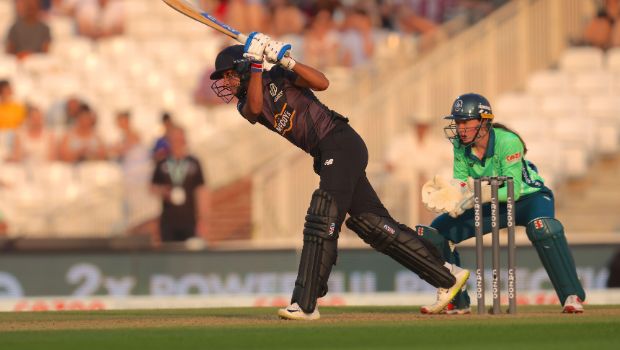 India women defeated England women by 88 runs in the second ODI to take an unassailable 2-0 lead in the three-match series. Women in blue produced a clinical performance in all three departments to outplay the England women at the St Lawrence Ground in Canterbury. Chasing a big target of 334, England was bowled out for a paltry total of 245. Danni Wyatt produced a lone fight and top-scored with a knock of 65 runs. For India, Renuka Singh starred with the ball by scalping 4 wickets.

After deciding to bowl first, Kate Cross gave England a good start by cleaning up Shafali Verma for just 8 in the second over. Smriti Mandhana played a steady knock of 40-runs while Yastika Bhatia chipped in with 26 runs. Harleen Deol then joined the India captain Harmanpreet Kaur in the middle as both went on to stitch 113 runs for the fourth wicket.

Deol was dismissed on 58 but Harmanpreet raced past the 100-run mark as India exploited two England debutants Lauren Bell and Freya Kemp. Harmanpreet slammed an unbeaten 143 off just 111 balls and led her side to post a massive total of 333/5 in 50 overs.

In reply, England had a bad start as Tamsin Beaumont (6) and Sophia Dunkley (1) departed early. Renuka trapped Emma Lamb (15) leg before reducing England to 47/3. Alice Capsey (39) and Wyatt gave their side some hope by adding 55-runs. But Indian bowlers took regular wickets to register a comprehensive win. The third and final ODI will be played on September 24

At Day 1 stumps Australia put up 166 runs for 2 wickets loss
A Dream Come True for Nadeem in Indian Cricket Team
Keemo Paul: From a utilitarian choice to a match winner for Delhi