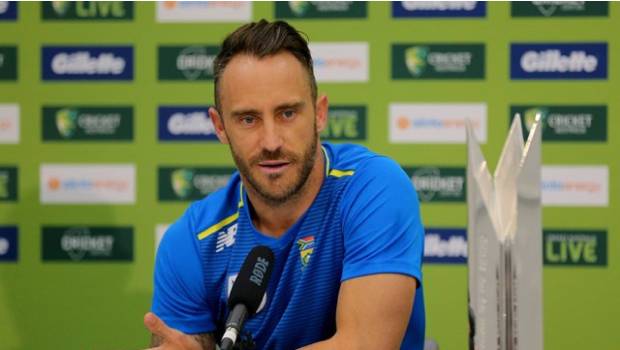 Former South African captain Faf du Plessis said he remained committed to the national team despite standing down from the role after one of his most challenging campaigns.

Former South African captain Faf du Plessis said on Monday he remained committed to the national team despite standing down from the role after one of his most challenging campaigns. In a pre-recorded interview released by Cricket South Africa, 35-year-old Du Plessis revealed some of the thinking behind his decision to give up the position in February. He also said the decision to rest him from most of the country’s limited over matches in the past campaign had been at his request.

“The season gone by is probably one of the toughest I had to face over my career because it had a lot of different elements to it that wasn’t just cricket,” he said.

He did not elaborate on the “elements” but it was a period during which there was turmoil in the administration of South African cricket, culminating in the suspension of chief executive Thabang Morne and the appointment of former wicket-keeper Mark Boucher as coach and ex-Test captain Graeme Smith as director of cricket.

Du Plessis said what had been an “emotional rollercoaster” started with a poor 2019 World Cup campaign in England.
It got even tougher when South Africa went to India with an inexperienced team and coaching staff and suffered heavy defeats in all three Tests.

“I was up for the fight but the sheer amount of pressure that the India team put on us took us to a breaking point,” he admitted.
“It was obvious to me that as a Test team we weren’t near where we wanted to be.”
‘The good fight’

Going into the 2019/20 season, Du Plessis was one of South Africa’s most successful Test skippers, with 17 wins in 29 matches.
But despite Boucher’s appointment, backed by the experience of Jacques Kallis as a batting consultant, the defeats in India were followed by a 3-1 home loss in a home series against England which meant he finished with an 18-15 win-loss record in 36 Tests.
“Then the pressure really started pointing towards me and a lot of energy was pushed towards me. I just felt at the time that I had been fighting the good fight for the Proteas and I gave it my absolute everything,” he said.