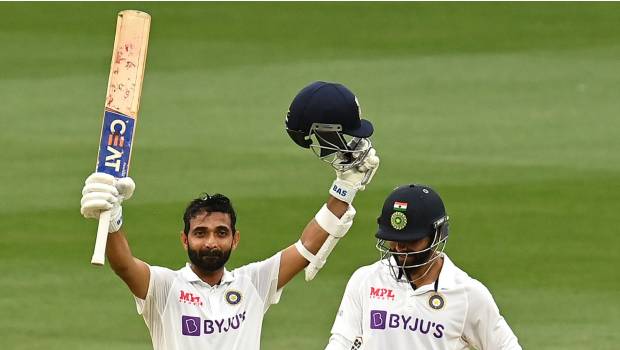 On Sunday Indian skipper Virat Kohli hailed Ajinkya Rahane’s unbeaten 104-run knock in the ongoing Test series against Australia at the Melbourne Cricket Ground.
At day 2 end of the play, India scoreboard displayed 277/5 and had a lead of 82 runs over Australia. Australian bowlers were successful in scalping the top-order wickets of India however within the final session, Rahane and Jadeja showed grit and determination to put India in a firm position and take control of the match. Rahane along with Jadeja put on a partnership of 104 runs for the sixth wicket.

Kohli in his tweet praised by saying it was another nice day for the team with a proper test game and lauded Rahane’s batting as a prime knock. Kohli came back home after the First Test match against Australia. BCCI had earlier granted the Indian skipper paternity leave as he and his wife Anushka Sharma are expecting the birth of their 1st child.

Rahane and Jadeja can resume the proceedings for the guests on day 3 of the second Test match. This is Rahane’s eighth overseas Test ton and this is his first hundred as the captain of India.

With this knock, Rahane additionally became the second Indian batsman to get a century on his 1st match as captain in Australia. On day one of the second Test, India had bundled out Australia for 195 as Bumrah scalped four wickets whereas Ashwin took 3 wickets.