Bhuvneshwar Kumar to join the Indian A cricket side 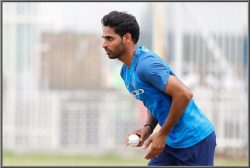 Bhuvneshwar Kumar will return to join the Indian A side before their final quadrangular series clash against the South Africans A side.

He had missed out the first three matches of India’s Test series in England due to fitness issues, England is leading 2-1, he also did not feature in the squad for the last of the two TEsts, that was If announced by the selectors last week.

If he proves his fitness in the 50-over clash against South Africa A at Bengaluru, he can still be called up.

To rest his back he had sat out of both the Nidahas Trophy – the Twenty20 International tri-series in Sri Lanka. Kumar has been troubled by the lower back problem for quite a while now.

Kumar has been troubled by the lower back problem for a while. He sat out of the Nidahas Trophy – the Twenty20 International tri-series in Sri Lanka – to rest his back, and then his workload during the Indian Premier League 2018 that followed was carefully managed, with Kumar sitting out of a few matches. He also missed the one-off Test against Afghanistan.

Having missed the one-off Test against Afghanistan, he’d also missed out the first two one-day internationals of a three-match series in England but the management opted to play Kumar in the third ODI, during which his injury got aggravated.

He’s spent the last four weeks at the National Cricket Academy in Bengaluru, for recuperating.

India fought back with a 203-run victory at Trent Bridge to keep the series alive after England lead the series winning the first two Tests at Edgbaston and Lord’s.