Tim Murtagh -Rashid and Mujeeb made all the difference 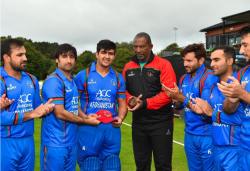 Tim Murtagh said Afghanistan’s “world-class” bowlers in Rashid Khan and Mujeeb Ur Rahman “made all the difference” between the two sides after Ireland went down by 29 runs in the first one-day international on Monday, 27 August.

After opting to field, Ireland did well to restrict Afghanistan to 227/9, with Murtagh returning a fine 4/31, including the wicket of Hashmatullah Shahidi (54), breaking his crucial 77-run partnership with Gulbadin Naib (64).

However, Ireland failed to put on partnerships in their chase. Andrew Balbirnie scored an 82-ball 55 even as wickets fell all around him, and the home side were bowled out for 198 in 48.3 overs. Every Afghanistan bowler picked up at least a wicket, with Khan, Mohammad Nabi and Aftab Alam picking up two each.

“They’ve obviously got a world-class bowler in Rashid, and Mujeeb is probably not that far behind him,” Murtagh, the paceman, said. “I think those two are the main difference between the teams. So as bowlers, we’ve got to help the batters out by restricting the opposition as much as we can.”

However, on the day, their batsmen couldn’t quite get going. “A total like that was only really one really good partnership (away), that would have sealed it for us,” said Murtagh. “Unfortunately, we couldn’t do that. We needed one of those partnerships to kick on and someone to score 70 or 80 and other guys to play around him.

“It was a shame – at halfway, we’d given ourselves a good chance. We started a bit slow in the field, but our bowlers, to claw it back and restrict them to 228 was a pretty good effort. We felt we were in the game at that stage and felt pretty confident. Obviously, it didn’t go our way and it’s disappointing.”

Afghanistan won the three-match Twenty20 International series 2-0. They will now look to seal the ODI series as well when the sides meet again at the same venue in Belfast on Wednesday.