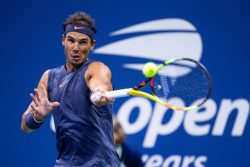 Rafael Nadal defending champion got into the third round of the US Open with a straight 6-3,6-4, 6-2 victory over Vasek Popisil unseeded on Wed the 29th of August.Looking fresh Nadal, whose match with his opponent David Ferrer was cut short due to a calf injury started brightly against the Canadian and never looked back.

The Spaniard wrapped up the opening set in 35 minutes after breaking early to go 3-0 up as Pospisil, ranked 88th in the world, struggled to settle into a serving rhythm.

The Canadian rallied briefly in the second set, improving his first-serve percentage and managing to break Nadal to lead briefly, but the world No. 1 broke back immediately and went on to win four games in a row to seize complete control.

“In the second set I had two games in a row where I had trouble with my serve,” Nadal said in a court-side interview. “The first one I saved, the second one I couldn’t. I was lucky to be able to break back.

“To win in straight sets is always positive.”

Nadal started the third set on the front foot, breaking early once again as Pospisil ran out of steam.

The Spaniard wrapped the contest in exactly two hours, and will now be facing Russia’s Karen Khachanov, the 27th seed.

On the women’s side Serena Williams overpowered German Carina Witthoeft 6-2, 6-2 to set up a third-round clash with big sister Venus at the US Open on Wednesday (Aug 29).

Williams sent down 13 aces and 30 winners to record her second consecutive straight-sets victory at Flushing Meadows as the 36-year-old, who is hunting a record-equalling 24th Grand Slam title, wrapped up the win in one hour and seven minutes.