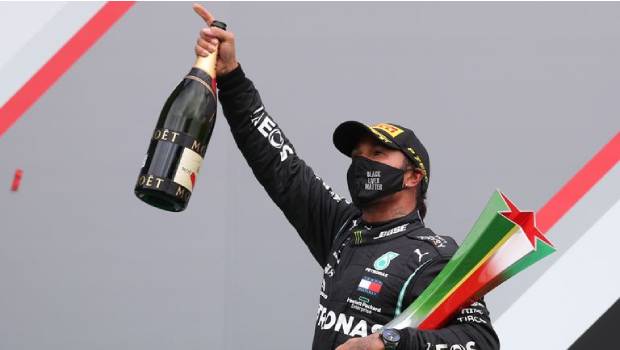 Lewis Hamilton the reigning world champion won his 92nd career win in a challenging Portuguese Grand Prix comfortably on Sunday. Hamilton with this has finally got the victory that he was so dearly looking forward to in a long time. The Silver Arrow driver created Formula 1 history by rewriting it as he now goes past Michael Schumacher’s record of the most race wins.

But Bottas then lead the race for few laps only to lose the position to his teammate. After regaining his track position Hamilton lead the rest of the race to take the chequered flag and became the most successful F1 racer of all time.

An emotional Hamilton after the race said he could have only ever dreamed of being where he is today. He added saying it would take some time for this win to settle in as he couldn’t find the words to speak.

Hamilton comfortably finished 25.6 seconds ahead of Bottas and 34.5 to Verstappen as he took his 8th win of this season. He extended extend his huge championship lead to 77 points over teammate Bottas.

Soon after crossing the line, Hamilton celebrated with his racing team’s mechanics and engineers. He even shared a long hug with his father, Anthony Hamilton, who then filmed the scene of Hamilton celebrating on the podium amongst a cheering crowd.

The British driver at the previous race at the Nürburgring circuit had equalled Michael Schumacher’s record of 91 wins. Hamilton also has a unique record of having won in more countries than anyone in Formula 1 history and he raised that tally to 24 in Portugal, as the country hosts a Grand Prix for the first time in 24 years.

Since his first win in 2007 in Canada at Montreal’s Circuit, Hamilton has been having a dream run where he has had at least a win in his every season. As the world lauds him for his impeccable performances, it would be very interesting to see him make many more records over the years to come.