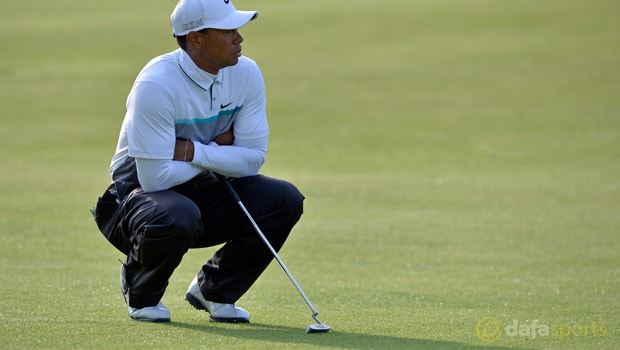 Former world number one Tiger Woods is staring at another missed cut after a five-over-par opening round at the Dubai Desert Classic.

Woods is making only his third competitive start since having 16 months out following back surgery and he failed to register a single birdie on his way to an opening round 77 in Dubai.

That left the world’s number 666th-ranked player trailing the early pace by a dozen shots.

Playing alongside the English pair of Masters champion Danny Willett and Matt Fitzpatrick, Woods was, once more, errant off the tee while his putting was also an issue.

Woods began in Dubai on the par-five tenth hole where a poor tee shot and approach into a bunker resulted in bogey. Another shot quickly went at the 12th while he also carded a six at the par-five 18th.

Further dropped shots on the front nine at the fifth and sixth holes left him five-over par.

A birdie attempt at the seventh brushed the edge of the hole while Woods pulled another close-range chance at the ninth – his final hole – tentatively wide of the target to compound a miserable day for the American.

Spain’s Sergio Garcia was the early pacesetter after a round of 65 that included six birdies and an eagle propelled him to seven-under par.

Willett meanwhile made the turn alongside Woods in two-under but he matched his playing partner with a bogey five on the fifth hole before signing for a one-under first round tally.