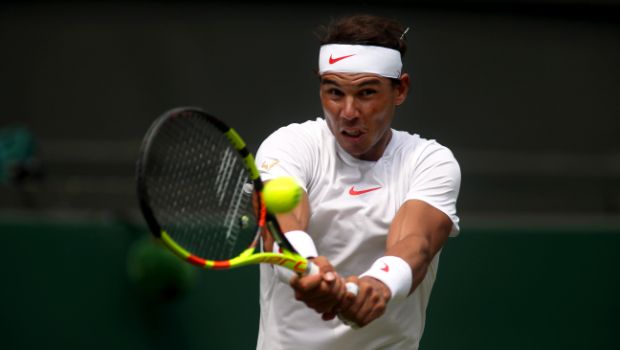 Rafael Nadal saved four crucial match points to fight past David Goffin 6-3, 5-7, 7-6(9) in an exciting battle to move into the Madrid Open quarter-finals. Five-time champion Nadal has set up a mouth-watering clash with teenager compatriot Carlos Alcaraz. Goffin put the Spaniard on the ropes and even put on a recital of shots in front of the white line. However, Nadal proved to be the best after battling it for three hours and nine minutes.

Just as Nadal’s favorite football club Real Madrid came back from the brink to reach the Champions League final on Wednesday, the 35-year-old Spaniard found extra energy in reserve to win a lengthy tie-break. Nadal has moved into a Masters 1000 quarter-final for the 99th time.

Nadal served for the match at 5-4 in the second set and held match point before the Belgian Goffin rallied to force a decider. The Spaniard, who made his return to the tour after a six-week injury lay-off, produced two perfect drop shots to save two match points in the decisive tie-break to clinch victory.

Unwanted errors from the top-seed Nadal allowed the Belgian to break first and go 3-2 up in the opening set. But the Spaniard quickly broke back twice to serve out the set and sealed it with a venomous crosscourt forehand winner.

The Spaniard’s stroke-making became more confident in the second set as he used every corner of the court to edge past Goffin. But the experienced Belgian eventually found his rhythm to rally from 3-5 down and broke twice to force a third set. When the Belgian served to confirm the break and take a 4-2 lead, he committed two double faults, the same as his opponent did in the previous game. Nobody would have ever guessed that Goffin would be such a tough competitor.

After securing a remarkable win, Nadal stated that he had unforgettable night on Wednesday and the spirit that Real Madrid had was just incredible. Madrid’s fighting spirit was a huge inspiration for him.

Nadal further added that it was a tough match and Goffin played at a very high level. The Spaniard informed that he was not happy because he thought to finish the match in straight sets.

Alcaraz defeated Cameron Norrie 6-4, 6-7(4), 6-3 to set up a third match with his idol Nadal. Earlier, the pair met in the Indian Wells semi-finals, where Nadal won in three sets but not before the teenager underlined his huge potential.