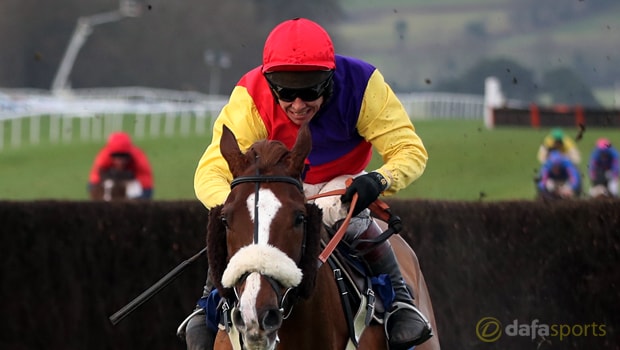 Colin Tizzard believes Native River has “as good a chance as any” horse of winning next month’s Cheltenham Gold Cup.

The seven-year-old has been scaling new heights this term, delivering superb staying performances to win both the Hennessy Gold Cup at Newbury and the Welsh National at Chepstow.

The Dorset trainer has Native River as one of three potential contenders for the Cheltenham Gold Cup, alongside King George VI Chase winner Thistlecrack and perennial festival performer Cue Card.

Ironically, the endless stamina of Native River might undermine the claims of current favourite Thistlecrack, who appeared to be outstayed by Many Clouds when losing his unbeaten record as a chaser on Festival Trials Day at Prestbury Park last month.

But Tizzard knows that Native River’s style of racing often will be just what is needed in the Blue Ribband event.

“He’s got to keep improving to win a Gold Cup, no question about it, but he’s a thorough stayer and the Gold Cup is often won by that type of horse.

He’s got as good a chance as any,” he told the Racing Post. Native River stayed dourly to win the Welsh National in December but he faces a different challenge this weekend when he runs in the Denman Chase at Newbury.

While the test may not see Native River in the best light, Tizzard expects champion jockey Richard Johnson to ensure the race is run to suit in his final prep before Cheltenham.

“Newbury was always going to be his target as he needs a race before Cheltenham and, while the two-mile-seven trip might be on the sharp side, I’m sure Richard Johnson will keep plenty of pace on,” the trainer added.

Sights on number one spot - PV Sindhu
Archery association secretary converts set-up into PPE manufacturing unit
Roger Federer says this is his "one last big, huge opportunity to do something great"