Cameron Norrie stormed into the quarters of the 2022 Korea Open 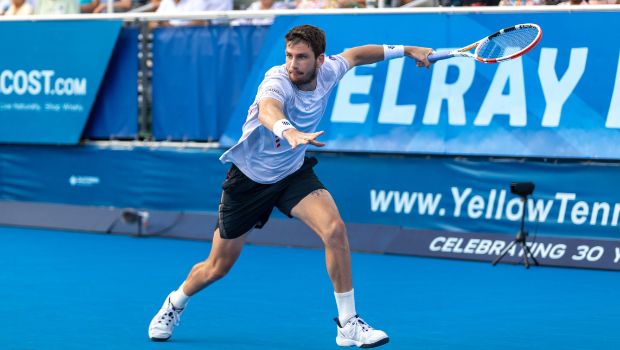 Cameron Norrie ended a three-match losing streak with a comprehensive victory over Kaichi Uchida in the opening round of the Korea Open. The British number one, Norrie was disappointing in Davis Cup defeats by Dutchman Botic van De Zandschulp and Alexander Bublik of Kazakhstan. He then failed to clinch a close match against Taylor Fritz at the Laver Cup last weekend. But the second seed Norrie took advantage of a kind draw in Seoul and wasted no time in crushing Japanese wild card Uchida, who is ranked 163.

World no.8 Norrie cruised past Uchida 6-2, 6-2 to storm into the quarter-finals of the Korea Open. Ambitious Norrie broke two of his opponents’ serves in each set to register a dominant victory in one hour and three minutes. In a strong serving display, the British player fired eight aces and did not face a single break point before securing the much-needed win. The 27-year-old tennis player has now advanced to 11 tour-level quarterfinals this season.

Norrie produced a clinical performance to put Uchida under pressure right from the start of the match. The Britain player continued to play aggressively and claimed five games in a row to seal the opening set.

Norrie continued his dominance in the second set too as the 28-year-old Japanese player failed to trouble his opponent. Norrie went on to play with the momentum and then quickly jumped to a 3-1 lead. But Norrie’s momentum was halted by Uchida’s hold of serve. However, the top seed got back on track by reeling off the next three games to win the match.

Cameron Norrie will take on eighth seed Jenson Brooksby of America in the quarterfinals on Friday. World no.40 Brooksby advanced to the quarter-finals after defeating the South Korean Kwon Soon-woo 6-3, 6-4 in one hour and 33 minutes. The 21-year-old American is bidding for his maiden tour-level title in Seoul.

Earlier this season, Brooksby enjoyed successful runs to the final in Dallas and Atlanta. The young Brooksby has now made it to the fourth quarterfinals this year. He won the first couple of them but lost his recent one in San Diego last week.

Norrie leads Brooksby 1-0 in the head-to-head record. Britain’s top seed won their previous encounter at the 2022 Indian Wells Masters in straight sets. Norrie, who has won twice the number of matches than Brooksby this season, would be considered the favorite heading into this contest.

Australian Open 2022: Emma Raducanu wins on debut, Fernandez makes an early exist
Djokovic shockingly gets disqualified from the US Open
Saina Nehwal and Kidambi Srikanth progress to the next round in the Orleans Masters