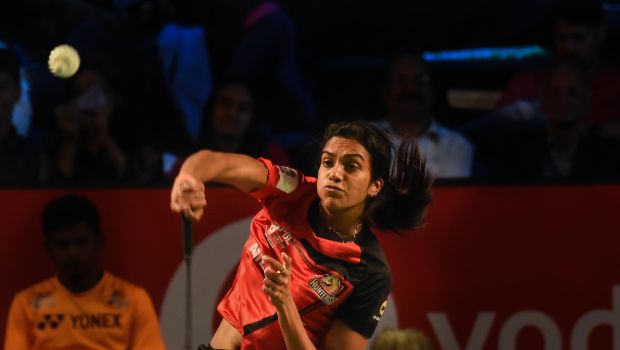 PV Sindhu battled hard to claim her first BWF title since winning the badminton world championships in 2019. The Indian Shuttler kept on losing twice in the finals last year at the BWF World Tour and the Swiss Open. Top-seed Sindhu hardly broke her sweat to surpass the 20-year-old Bansod. Playing in a depleted field, former World champion Sindhu took complete control from the start and raced to a 7-0 lead inside three minutes.

Sindhu kept the momentum and charge on to bag the first game in just 14 minutes. The Indian ace used her vast experience to make it extremely difficult for her young opponent. World no.7 Sindhu brought on her skills to great effect and led the second game 11-4 before the break. However, the young mounted a comeback and cut the deficit to five points (12-17).

But the Tokyo Olympic silver medalist used her height to smash powerful shots and deliver pinpoint drop shots. Sindhu sealed the second game with consummate ease. Though the world no.84 Bansod made a good fight back, it was not enough to level Sindhu’s class. Malvika Bansod tried her best to forge a comeback but failed to finish it well.

This was the first clash between Sindhu and Malvika Bansod at the international level tournament. Earlier, Bansod created waves and stunned all with her win over the Olympic bronze medalist Saina Nehwal at the 2022 India Open. Malvika Bansod is an Indian rising star, who had won the all-India senior ranking event in December. She has secured international titles such as the Maldives International Future series and the Annapurna Post International Series in 2019.

Earlier in the day, seventh-seeded Indian duo Ishaan Bhatnagar and Tanisha Crasto won the mixed doubles title. They claimed the victory after a straight-game win over compatriots Hema Nagendra Babu and Srivedya Gurazada. The Indian pair took 29 minutes to beat the unseeded pair 21-16, 21-12 and clinched their first Super 300 crown.