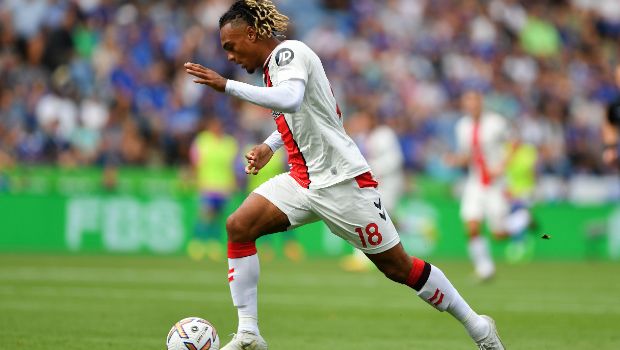 Premier League champions Manchester City have been knocked out of the Carabao Cup after suffering a shocking 2-0 defeat to Southampton on Wednesday night. A crawling Manchester City crashed out at the quarter-final stage after being soundly and deservedly beaten by the Saints. Southampton placed at the bottom of the Premier League table scored twice in the first half through Sekou Mara and Moussa Djenepo. Those two goals gave the Saints an unexpected advantage at St.Mary’s and an abject City never seriously threatened to get back into the game.

Manchester City players delivered one of their poor performances and were unable to muster a single shot on target. City’s boss Pep Guardiola lost a domestic quarter-final for the first time in his managerial career after winning the previous 15. On the other hand, Southampton played with vigor and vitality to secure a memorable win.

French forward Mara’s excellent finish after City gave the ball away sloppily helped the Saints to advance. City gave away the possession in the center, James Ward-Prowse who thought of shooting from 40 yards hesitated and lost the ball. Kalvin Phillips attempted to break but Lyanco robbed him, advanced down the wing, and produced a low cross to Mara, who swept the ball into the bottom right corner.

Five minutes later, Djenepo scored a stunner to make it 2-0 for Southampton. If the first goal was sensational, this is outrageous. Cole Palmer had a shot in the Southampton box, but the Saints cleared it cleverly and went up the other end. Djenepo was allowed to stride into acres down the inside-left channel and then drifted towards the center. The Malian winger spotted Ortega dossing around in no man’s land and produced an exquisite shot over him into the top right corner. An excellent run and a superb finish.

Saints played without fear to clinch victory while the Blues who have won the Carabao Cup six times since 2014 failed to reach the final four. Even the second-half introduction of City’s star strikers Kevin De Bruyne and Erling Haaland also failed to spark a revival for Guardiola’s side. Southampton’s reward for beating City will be a two-legged tie with Newcastle United.

In another last-eight clash, Nottingham Forest defeated Wolverhampton Wanderers 4-3 on penalties to reach a cup semi for the first time in over two decades. Forest keeper Dean Henderson was the hero of the night as he saved two penalties. Four-time winners Forest will take on Manchester United in the semi-finals.