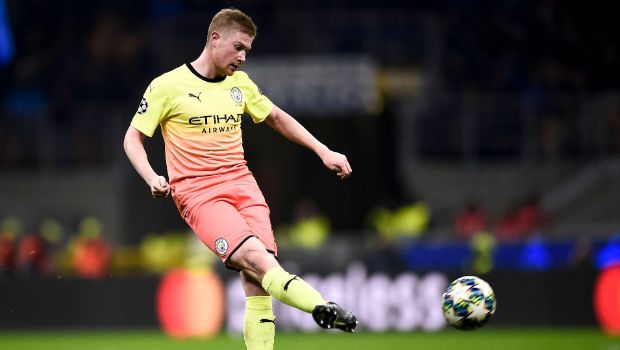 Manchester City produced a stunning performance to register a dominant victory over the Wolves. Manchester City has taken a step closer to the Premier League title as Kevin De Bruyne’s master-class guided them to a remarkable win at Molineux. The Belgian midfielder scored a first-half hat-trick to restore his team’s three-point lead over Liverpool in the Premier League. De Bruyne single-handedly lifted his side back to sole possession of first place with 89 points from 36 matches played.

City was level on points with Liverpool going into the game, but they had a lead-on-goal difference. However, City produced a stellar play of football to restore their three-point gap. Manchester City has become the first team in English top-flight history to win five consecutive league games by a margin of at least three goals. Pep Guardiola’s side now needs just four points from their last two fixtures to win their fourth title in five seasons.

Manchester City wasted no time to take the lead as De Bruyne scored the opener in the 7th minute. The Belgian footballer shot past Wolves goalkeeper Jose Sa from an intelligent Bernardo Silva through ball. Wolves did not take long to respond as Leander Dendoncker scored the equalizer in the next four minutes. A rapid counter-attack from the Wolves saw Pedro Neto find Dendoncker on the edge of the box, who smashed past City keeper Ederson.

However, De Bruyne quickly put his side back in front just after the quarter-hour mark. He was in the right place to fire the rebound into a wide-open net after Jose beat Raheem Sterling. The Belgian star finished off his first hat-trick for City in the 24th minute. He cleverly cut across the top of the penalty area and blasted a shot from a distance that curled into the bottom corner of the post to give City a 3-1 lead.

City continued to play their attacking game in the second half and looked for more goals to improve their goal difference. Sterling thought he had extended their lead when he ran clear and beat Wolves’ keeper but an offside flag cut short his celebrations.

De Bruyne was in the right place yet again for his fourth of the night, Phil Foden’s cross was deflected into his path and he pounced for the easiest finish to make it 4-1. City had its fifth goal to reach the final score-line with Sterling tapping into an empty net after Jose denied Joao Cancelo.