How India can turn their fortunes at the Intercontinental Cup 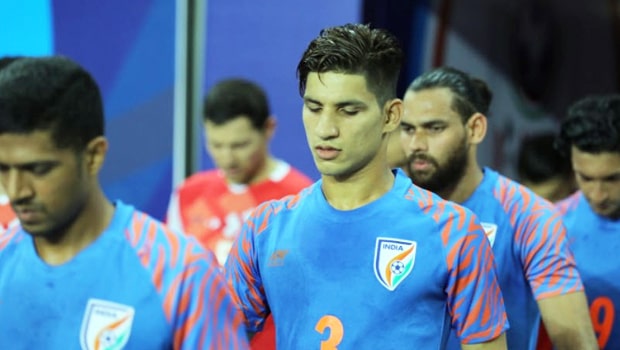 The Indian football team slumped to a disappointing 4-2 loss against Tajikistan, despite leading 2-0 at half-time. Following the loss, the Blue Tigers now need to win against North Korea to stay alive in the Intercontinental Cup. Heading into that game on Saturday in Ahmedabad, Igor Stimac would be targeting a few changes in order to change their fortunes around come Saturday.

These are the changes we can expect from the Indian line-up for the game against North Korea.

The Indian defence against Tajikistan looked really solid in the first half, but crumbled post the interval when the opposition started creating chances. The gaps between the centre backs became more prominent, and the defenders began mistiming their tackles and headers, gifting opportunities to the Tajik forwards. New players Mandar Rao Dessai and Narender Gahlot struggled to handle the pressure of the game come the second half. If the likes of Sandesh Jhingan and Subhasish Bose are fit enough by Saturday, the youngsters could be dropped in this crunch game. Even young Rahul Bheke could be rested for Anas Edathodika to bring more stability to the backline.

India opted to go with a 4-5-1 formation in their game against Tajikistan, playing three central midfielders in Anirudh Thapa, Sahal Abdul Samad and Amarjit Singh. The trio helped keep the defence compact in the first half but as soon as the game started getting stretched, they weren’t as efficient. Heading into the second half of the competition for India, Amarjit could potentially be benched to accommodate for an extra winger like Ashique Kuruniyan to play the 4-3-3 formation or the coach could go for Stephan Constantine’s preferred 4-4-2 formation with an extra striker added for the auxiliary midfielder.

Jobby Justin could get his chance

The pacey forward who was the leading Indian scorer in the I-league for the 2018-19 season plying his trade for East Bengal FC. The successful domestic season earned him a contract with Indian Super League club ATK, but Justin still hasn’t managed to cement a place in the Indian national side. However, heading into this must-win clash against North Korea, the 25-year-old could be used for his incisive runs and natural attacking instincts. Justin’s inclusion could also help club captain Sunil Chettri, giving him an opportunity to play his natural position on left wing.