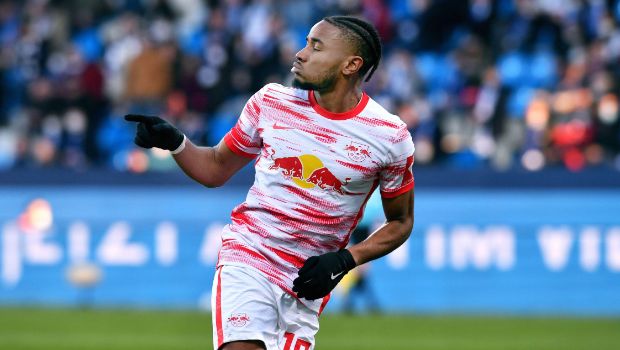 Defending champions France will be playing without its forward player Christopher Nkunku at the 2022 World Cup in Qatar. Christopher is ruled out of the World Cup after suffering an unspecified injury in the training session, just a week before France’s first opening game.

The 25-year-old Nkunku was expected to play a big role in the France line-up as the Frenchmen are eying to retain the World Cup title.

Nkunku made it to the national squad after scoring 42 goals for German giants RB Leipzig since the start of the 2021-22 campaign.

However, a heavy challenge by Eduardo Camavinga has ended the striker’s hopes of in playing the World Cup. Video footage of the Real Madrid midfielder’s challenge on Nkunku was shared on social media, leaving many France fans worried about the injured player.

France confirmed that Nkunku will not be part of their squad for the tournament. But it remains unclear whether the forward’s injury was a direct consequence of Camavinga’s tackle and how long the Leipzig striker is expected to be out. The team management has wished him a speedy recovery. France is yet to reveal Nkunku’s replacement.

Randal Kolo Muani is likely to replace Nkunku in France’s squad. The 23-year-old striker has scored eight goals for Eintracht Frankfurt this season and helped his former club Nantes win the Coupe de France in May.

Nkunku was in full excitement after finding a place in France’s 26-player just five days ago but now he will be devastated by the injury. A dream come true, he wrote on his Instagram. He also expressed that looking forward to representing his country in the most beautiful competition.

France manager Didier Deschamps is experiencing an injury crisis, as several of his regular players will miss the tournament. Key midfielders Paul Pogba and N’Golo Kante, and defender Presnel Kimpembe are absent due to injuries. However, star strikers Kyle Mbappe and Karim Benzema will lead the France attack.

France is among the favorites to win the 2022 World Cup after beating Croatia in the last final in Russia four years ago. The Frenchmen are the two-time champions and also won the Nations League title in 2021. But they were knocked out of Euro 2020 at the last 16 stage.

France will start its World Cup campaign against Australia in Al Wakrah on Tuesday, November 22. Four days later it will play Denmark in Doha. France’s final group game will be up against Tunisia on November 30.