Euro 2022: England cruises into the quarter-finals with a record-breaking win over Norway 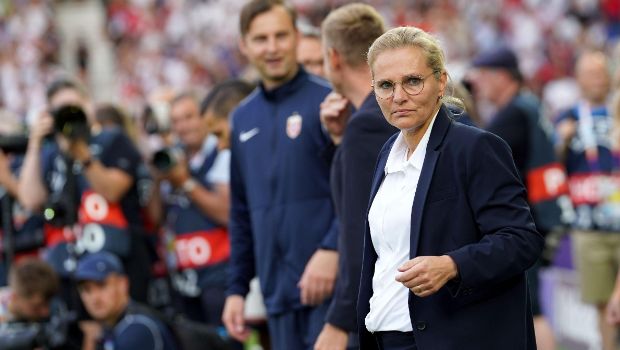 England women scripted history by hammering Norway women 8-0 in their Group A clash at the Women’s European Championship on Monday. With a record-breaking win, England became the first team to make it into the quarter-finals of Euro 2022. Sarina Wiegman’s side also became the first team to score eight goals at a Euro final. After securing a 1-0 win over Austria, who beat Northern Ireland 2-0 on Monday evening, England women romped to victory over the Norwegians in style as they dominated throughout the match.

Earlier, England played a tough game to seal a win against Austria, but they had no difficulties in outclassing Norway, their toughest group opponents on paper. Wiegman’s merciless side struck through Beth Mead (3 goals), Ellen White (2), Georgia Stanway, Alessia Russio, and Lauren Hemp to become the first Women’s team to score more than six goals in a game at the European Championships.

The tenacity of White saw the Lionesses awarded a penalty with only 12 minutes gone in sweltering conditions and Stanway converted it with ease to go up 1-0. Three minutes later, Hemp netted to double the lead. She bundled Mead’s cross over the line. A few moments later, White made no mistake to bully Thorisdottir off the ball and raced through to slot home past Norway goalkeeper Guro Pettersen and put England out of sight before the half-hour mark.

White was denied a second only three minutes later courtesy of a strong save down low by Pettersen. But England made it 4-0 before the end of the first half as Arsenal’s Mead headed home from Hemp’s cross. Mead was not in a mood to finish with just one effort, the 27-year-old forward weaved her way through a sea of red shirts in the penalty area and produced a rifled effort into the bottom corner to make it 5-0.
England women threatened their opponent with continuous attack and made it 6-0 in the 41st minute when Fran Kirby’s cross helped White to tap in at the back post. The Lionesses bagged a history-making seventh goal when Manchester United’s Russo came off the bench and delivered a fine header into the back of the net. Mead completed her hat trick from close range after Pettersen kept out Keira Walsh’s long-range effort.

England top Group A on six points, former leaders Norway dropped to third on three points with Northern Ireland yet to pick up a point after two games. England will face Northern Ireland at St Mary’s on Friday.