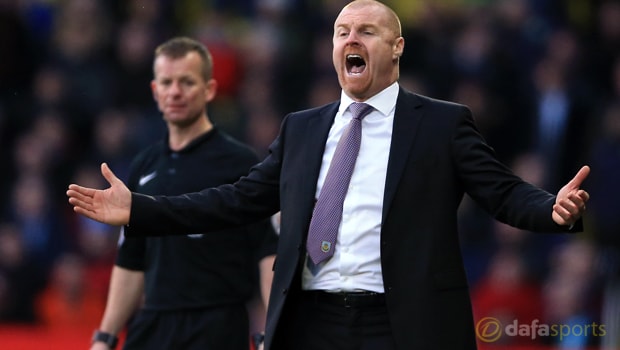 Burnley boss Sean Dyche has praised the performance of his players despite seeing them suffer another away defeat against Watford on Saturday.

The Clarets were beaten 2-1 at Vicarage Road, but they had to play 84 minutes of the contest with ten men after midfielder Jeff Hendrick was sent off early doors.

Goals from Troy Deeney and M’Baye Niang then put the Hornets into the ascendancy, but Burnley produced a spirited second-half performance, pulling a goal back from the penalty spot through Ashley Barnes, and Dyche had nothing but praise for side after the match.

“The early sending off affects the game radically, but today I thought we were absolutely fantastic,” he said.

“To take a knock so early, as we did by losing Jeff, then play for that amount of time away from home, with 10 men, particularly in the second half, and show that will and desire to go and win a game was absolutely outstanding.”

The defeat means Burnley have still only collected one point on their travels this season, but Dyche is convinced the victories will come if they continue to perform in the same manner between now and the end of the campaign.

“In the end it could have been one of those great stories, but unfortunately not,” he added. However, if we keep going about our business as we are, then we’ll be fine, I’m sure.”

Burnley are next in action when they play host to league leaders Chelsea at Turf Moor next Sunday.

The Clarets are priced at 7.50 to secure their tenth home league win of the season against Antonio Conte’s men, who are available at 1.40, while the draw is on offer at 4.33.