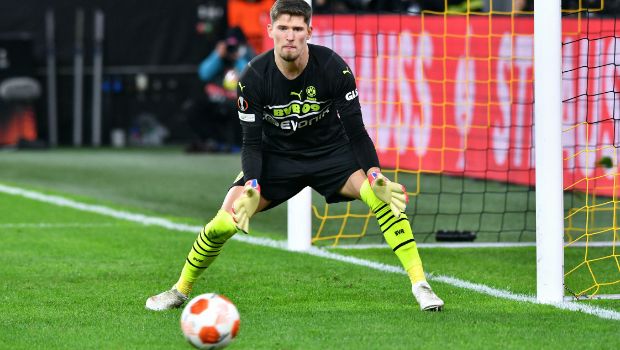 Borussia Dortmund goalkeeper Gregor Kobel’s penalty save from Riyad Mahrez helped his side to finish a goalless draw with Manchester City on Tuesday. The result has helped Dortmund to qualify for the Champions League last 16. Manchester City was awarded a penalty kick when Mahrez was brought down by Emre Can in the 56th minute. But Kobel stood strong to push away the Algerian winger’s effort from the spot and guided his side through to the knockout stage for the seventh time in nine years.

With Manchester City already qualified for the last 16, coach Pep Guardiola rotated his starting line-up, with Kevin De Bruyne, Bernardo Silva, Jack Grealish, and goalkeeper Ederson among the substitutes. Guardiola gave former Arminia Bielefeld’s goalkeeper Stefan Ortega his debut. Red-hot striker Erling Haaland had few clear chances in the first half of the game. But he was subbed off at half-time, keeping in mind the Saturday clash with Leicester.

Sevilla’s 3-0 loss to FC Copenhagen earlier on Tuesday left Dortmund only needing a draw to qualify. The teenage duo of Karim Adeyemi and Youssoufa Moukoko had several first-half chances to give Dortmund the lead. But it was the men in blue who had the best opportunity in the match.

Former Liverpool midfielder Can standing in for the suspended Salih Ozcan, struggled with City’s pace on the counter and gave away a clear spot-kick. Mahrez struck the penalty solidly but Swiss keeper Kobel got both palms on the ball to keep City scoreless.

In the closing stages of the game, both sides appeared content to share the honors, eliminating Sevilla and Copenhagen. In the final Group G matches next week, Dortmund will travel to Copenhagen while Manchester City hosts Sevilla.

In a Group H game, Paris Saint-Germain registered a dominating 7-2 win over Maccabi Haifa at the Parc des Princes to cruise into the Champions League last 16. PSG star strikers Lionel Messi and Kylian Mbappe scored twice while Neymar and Carlos Soler scored a goal each.
PSG clinched its place in the Champions League knockout stage with a game to spare. The German team is level on 11 points with qualified Benfica but now has a comfortable edge on goal difference. PSG will travel to Juventus for the final group game.