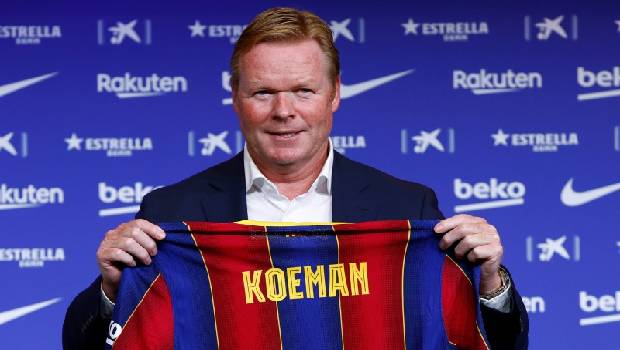 Ronald Koeman passed a chance of lifting his first trophy as Barcelona manager on Sunday and saw the side’s talisman Lionel Messi sent off in a 3-2 defeat to Athletic in the Spanish Super Cup. Barca twice drove the game, through Antoine Griezmann’s goals. But that wasn’t sufficient as Inaki Williams scored a splendid goal at the extra time to seal an exuberant victory.

Athletic had a better first half compared to Barca when Marc-Andre ter Stegen blocked a shot from Capa. While Messi took a shot that went over the crossbar prior to half-time.

After Alba and Messi penetrated the Athletic defense Griezmann opened the scoring in the 40th minute for Barca as he struck the ball from close range and beat Unai Simon. But their lead lasted only for 2 minutes with Oscar De Marcos leveling the game by nipping the ball in between Clement Lenglet and cleared past Ter Stegen.

Athletic came back strong during the next half when Raul Garcia tried heading from a free-kick but to Barca’s relief the goal was called off-side after a VAR check.

Athletic kept on seeing a lot of chance when Inaki Williams blasted wide after Ronald Araujo’s passed the ball directly to the striker.
Barca had few goes at goal however they struck in the 77th minute. An incredible drop down the left saw Alba cross for Griezmann to clear home his second of the evening.

The goal seemed sufficient for victory to Barca however Athletic leveled the game again at the 89th minute when Iker Muniain floated a free-kick into the box to Asier Villalibre to score. Three minutes after equalizing Athletic took the lead for the first time in the game. Inaki Williams was given ample space to blast a blinder into the nets from 25 yards out.

Koeman reacted by sending Riqui Puig and Francisco Trincao in quick succession to mend the game for the last 15 minutes as Barca went looking for an equalizer.
Barca had opportunities to pull one back as well. Nunez nearly put a Messi free-kick into his own goal, while Griezmann volleyed an Alba cross wide of the target. However, Barca couldn’t find a third goal and their hopelessness was exacerbated late when Messi saw red in the wake of lashing out at Villalibre in the last minutes of the game.