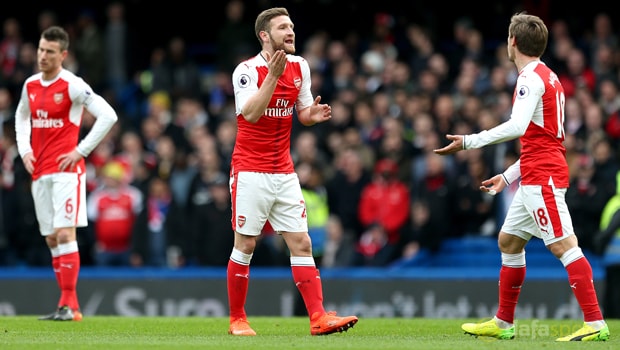 Arsenal defender Shkodran Mustafi insists the club still remain in the title race despite losing to leaders Chelsea at the weekend.

The Gunners currently sit fourth in the Premier League, 12 points shy of Chelsea after Saturday’s 3-1 loss at Stamford Bridge.

The north London club, who are priced at 51.00 to win the Premier League, have 14 games left this season to try and catch the Blues, but competition is tough at the top of the table.

Liverpool and Manchester United are also looking to break into the top four but Mustafi feels the title is still within reach.

The German was added to the Arsenal squad over the summer and has been one of their better performers over the first half of the campaign. However, after back-to-back defeats – against Watford and Chelsea – their title charge appears to be fizzling out.

Mustafi insists the squad will continue to fight – starting at home against Hull City. “I think it’s going to be more difficult than it was before but I’m a believer.” Mustafi said.

“I don’t give up. “As long as it’s possible we’re going to fight for it, and in the end we will see and if we’re lucky enough and good enough to go for it or not.

“The first game we lost at home [to Watford] was really disappointing. We woke up a bit late, conceded two quick goals and it was difficult to come back.

“We were disappointed as well with losing at Chelsea, which was a completely different game. We knew it would be difficult at Stamford Bridge but we knew as well it’s possible to win. I think in the end we didn’t do enough.”

Premier League: Manchester City smashes Arsenal with Kevin De Bruyne masterclass
Ranji 5th Round Review
EURO 2020: France and Portugal qualify for the Round of 16 after a 2-2 draw in Budapest