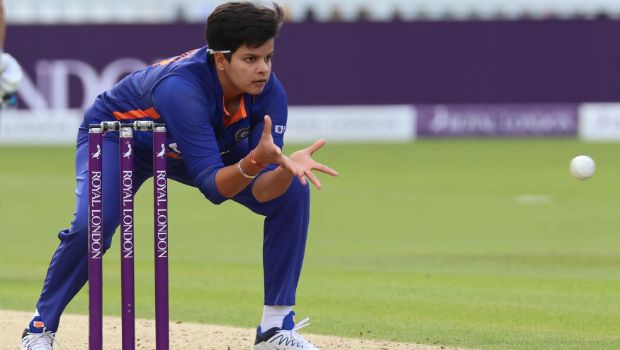 India women’s team outclassed UAE by 122 runs in their second encounter of the inaugural U19 World Cup at Benoni, South Africa. India’s dominating win has helped them to cement their place at the top of Group D with 4 points and an excellent net run rate of +4.405. Chasing a huge target of 220, UAE never looked in the chase. Indian bowlers produced a disciplined attack by bowling correct lines and lengths, which helped them to register a remarkable win.

Invited to bat, skipper Shafali Verma and opener Shweta Sehrawat gave a cracking start to India. Both added 111 runs for the opening wicket in just 8.3 overs.

Shafali was destructive from the start and scored quick runs with top-class attacking batting. The UAE bowlers were clueless as Shafali sent the ball to the boundary ropes 12 times and over it four times in her fiery knock of 78.

Sehrawat played an anchoring role to perfection. The right-handed batter brought up her second consecutive fifty and looked in complete control with a brilliant unbeaten knock of 72. Richa Ghosh played a quickfire cameo of 49 and guided India to post 219/3 in 20 overs.

In reply, UAE looked up to the challenge as its opener Theertha Sathish found the fence four times in the first four. But the charge was short-lived as Shabnam dismissed her in the fifth ball. Lavanya Keny scored a painstakingly slow 24 off 54 balls. UAE scored runs at a slow rate and lost regular wickets. UAE, who never seemed in contention, managed to finish at 97/5 in 20 overs.