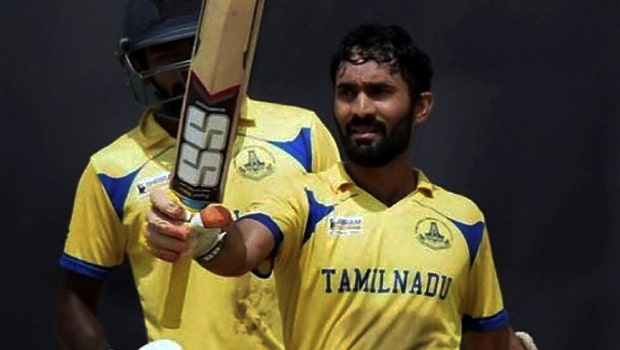 The fourth edition of Tamil Nadu T20 League is set to begin on July 19 with Dindigul taking on Chepauk in the first match. The tournament has enjoyed unprecedented success over the last three seasons as players like Washington Sundar, Murugan Ashwin and Varun Chakravarthy, among others, made successful leaps into higher leagues like the Indian T20 League and also into the national team. The fourth edition is now here to unearth many more of such hidden talents. For now, let’s have a look at some of the players who can be expected to fire in this season.

The Tamil Nadu keeper-batsman has been one of the most successful batters in the history of the Tamil Nadu T20 League. He was the second highest run-getter in the league last year with 396 runs in nine innings at an excellent average of 66. Subsequently, he was also picked up by Chennai in the Indian T20 League auction of 2019.

Another product of this league who made a successful leap into the Indian T20 League. He has played for three Indian T20 League franchises, which include Pune, Bangalore and Punjab, till now and will represent Chepauk in this year’s Tamil Nadu T20 League. As far as his T20 record goes, the 28-year-old has 44 wickets in 45 matches at an average of 26.25 and a strike-rate of 21.1.

The 19-year-old made his name in this league a couple of years back, got fast-tracked into the Indian T20 League and is now a part of the national limited overs setup as well. Sundar is one of the best spin-bowling all-rounders in the country at present and he has a century to his name in the Tamil Nadu T20 League as well. As far as his T20 record goes, Sundar has 42 wickets in 43 matches at an excellent economy rate and strike-rate of 6.86 and 20.5 respectively. He is a handy asset with the bat also as testified by his tally of 406 runs at an average of 20.30.

The Keeper-batsman played a pivotal role in Madurai’s maiden Tamil Nadu T20 league title victory last year. He was the highest run-getter in the tournament with 472 runs in 10 matches at an average of 78.66. His overall strike-rate of 153.44 also gives an idea about the destruction he caused at the top of the order. He would be eager to carry his form into this season as well.

He was the third highest run-getter in the league last year with 347 runs to his name at an average nearing 50. Anirudha, the son of former Indian cricketer Kris Srikkanth, is a pretty experienced campaigner as well having enjoyed stints with  Chennai in the Indian T20 League. He has a vast experience of playing in 71 T20 matches and has scored over 1200 runs at a decent average of 26.18.

The 38-year-old veteran was the highest wicket-taker for Trichy last year. He picked up 10 wickets in seven matches at an excellent average and strike-rate of 19.30 and 14.9 respectively. He had registered a five-wicket haul as well and that tells a lot about his wicket-taking abilities. It is further testified by his overall T20 record which reads 33 wickets in 25 matches at an average of 16.09 and strike-rate of 15.

Bollywood’s King Khan has a namesake in cricket too. The right-handed batsman took the league by storm last year. He played some magnificent knocks at the top of the order and was the fourth highest run-getter with 325 runs at an average of 36.11. These runs included three fifties as well and he scored at a healthy overall strike-rate of 141.30 as well.

The all-rounder has switched teams from TUTI to Kanchi this season. He had a fairly successful campaign with the bat playing for TUTI last season. Sathish scored 233 runs in seven matches at an average of 77.66 and an outstanding strike-rate of 182.03. He can also bowl and is a real wicket-taker. His addition will bolster Kanchi’s lower order and will add some much needed variety to their bowling attack as well.