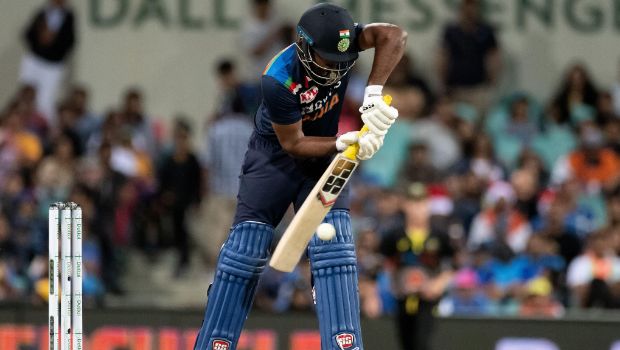 India will square off against Sri Lanka in the second T20I today at 7 pm at the Maharashtra Cricket Association Stadium. Hardik Pandya-led side has been dealt with a massive blow ahead of the series decider. One of the star Indian batters Sanju Samson has reportedly stayed back in Mumbai for scans after picking up an injury during the first T20I match.

India’s wicketkeeper-batter Samson had a forgetful day at the Wankhede as he failed to fire with his bat. The right-handed batter’s decision to attack Dhananjaya de Silva backfired as he was dismissed cheaply for 5. Samson is such a fine batter and has so much talent but his shot selections sometimes let him down. The 28-year-old cricketer who is a fine fielder also dropped a catch of the visitors’ opener Pathum Nissanka during the edge on the seat thriller between the Asian giants.

According to reports, the middle-order batter has not travelled to Pune with the Men in Blue. It has also been learned that Samson is doubtful to play in the series decider as he picked up a niggle on his knee while attempting a diving catch of a Lankan opener in the very first over. Though Samson was advised to take medical advice after experiencing swelling, the star player remained on the field for his side.

India’s attacking batter Rahul Tripathi might earn his maiden cap by replacing Samson in the playing XI. Arshdeep Singh who missed out on the series opener is now available for selection and this could cause some selection dilemmas for the team management.

Since Dhoni has gone, that responsibility is on me, Hardik Pandya makes a big statement
Wasim Jaffer urges team India to add Axar Patel in the playing XI for the second ODI
India vs West Indies 1st OD International: West Indies beat India by 8 Wickets