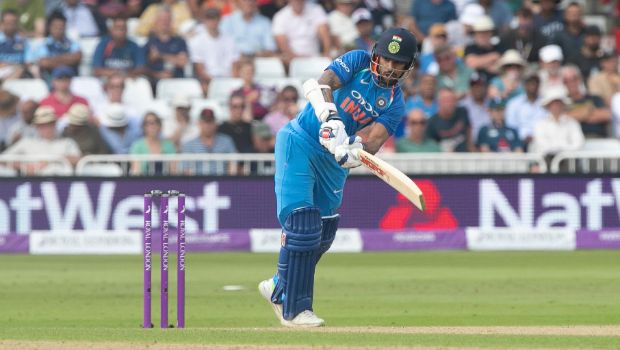 India head coach Rahul Dravid featured in Shikhar Dhawan’s viral Instagram reel as the Indian squad left for West Indies. The social media cannot be kept calm after witnessing Dravid in action. India stand-in captain Dhawan, who is famous for his rather hilarious Instagram reels, took to his official account to update the fans on team India’s departure. The left-hand opener did it in his own style, using a viral Instagram trend that featured a number of India players and also head coach Dravid.

Men in blue arrived in West Indies on Wednesday as they gear up for a white-ball tour in the Caribbean country. The Dhawan-led Indian team will take on the Windies in three ODIs, following which the regular captain Rohit Sharma will return to the squad for five T20Is.

A number of senior players Rohit, Virat Kohli, Hardik Pandya, Jasprit Bumrah, and Rishabh Pant have been rested for the ODI series against West Indies. In addition, star batter Kohli and India’s pace spearhead Bumrah have also been rested for the T20Is.

Dhawan, who is a part of the Indian ODI setup, remains out of contention in the other two formats. The 36-year-old batter made a return to Indian colors earlier this month. But the opener’s performances remained inconsistent in the England series. Dhawan will be aiming to regain his form against the Windies.

Many youngsters like Shubman Gill, Ishan Kishan, Sanju Samson, and Arshdeep Singh have been selected for the ODI series. The opener of the three-match series begins tomorrow at 7:00 pm at Queen’s Park Oval.

Persistent rains washed out the second ODI between India and New Zealand
I Know We Will Win This Battle: Kapil Dev Coronavirus Crisis
Mujeeb and Rashid Khan starred as Afghanistan thrashed Bangladesh