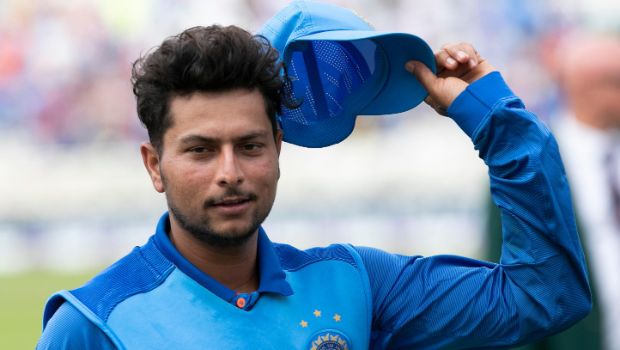 Delhi Capitals defeated Kolkata Knight Riders by four wickets in the IPL clash on Thursday night. Chasing an average target of 147, Rovman Powell stayed calm and played an unbeaten cameo of 33-runs off 16-balls to take DC home. Earlier, Kuldeep Yadav once again emerged as the standout bowler against his former franchise. The left-arm spinner scalped four wickets in his three overs.

After being invited to bat first, KKR openers Aaron Finch (3) and Venkatesh Iyer (6) yet again failed to give a good start to their side. In the 7th over, Yadav struck twice to put more pressure on KKR by dismissing Baba Indrajith (6) and Sunil Narine (0). However, KKR skipper Shreyas Iyer alongside Nitish Rana batted with responsibility and added 48-runs before Yadav trapped Iyer LBW on 42.

In the same over, he bagged dangerous Andre Russell for a duck. Rana fought a lone battle and smashed 57-runs to help KKR post a respectable total of 146/9 on the board. DC pacer Mustafizur Rahman finished with figures of 3/18.

In response, DC started the run chase on a shaky note, as Umesh Yadav took a brilliant catch to dismiss Prithvi Shaw for a golden duck. Harshit Rana scalped Mitchell Marsh (13) to put DC on the back foot. However, David Warner looked solid and played some excellent shots to keep DC in the hunt.

But Umesh Yadav came back and made the game alive by dismissing Warner (42) and Rishabh Pant (2). Though wickets kept falling, Powell stood steady and finished the match with a maximum.

IPL 2022: David Warner-Mitchell Marsh partnership powered Delhi Capitals to clinch victory
Virat and Co gets ready for Down Under
India vs New Zealand, where did India lose the World Test Championship Final