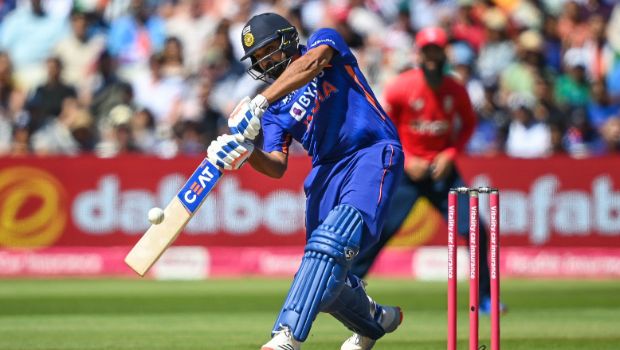 Sri Lanka will be touring India from January 3 to January 15 to play in a three-match T20I series and three ODI matches. According to reports, India captain Rohit Sharma is likely to miss the home series against the Lankans. The report stated that Rohit is yet to recover completely from the thumb injury he sustained during the second ODI against Bangladesh earlier in December.

Rohit did not have a good year with the bat. The right-handed batter struggled to live up to the expectation and deliver well to big tournaments. In two Tests this year, Rohit scored only 90 runs. In eight ODIs, the opener scored 249 runs at an average of 41.50 and a best of unbeaten 76. Rohit scored 656 runs in 29 T20I innings this year at an average of 24.29, a strike rate of 134.42, and his best score of 72.

Three players namely Shubman Gill, Sanju Samson, and Deepak Chahar, could return to the blue colors. Gill would make his T20I debut by replacing KL Rahul, who is not in a good form with the bat. Rahul is likely to miss the series as he is going to get married.

Samson has been in excellent form with the bat and recently scored three fifties in the Ranji Trophy. With Rishabh Pant not having a great time in white-ball cricket, Samson has more chances to be drafted for the T20I series. Chahar who is recovering from a hamstring is likely to be seen in the T20I squad or in the ODIs.

Cricket Australia confident of going through with the Adelaide Test as planned
Rohit Sharma confirms India’s opening duo for T20 World Cup
India versus New Zealand: Yuzvendra Chahal has another bunny in the Kiwi side