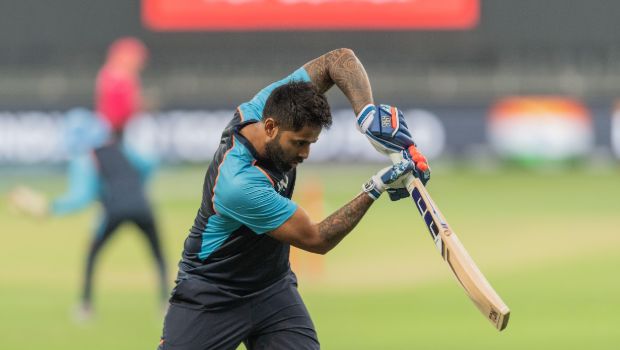 India defeated New Zealand by 5 wickets in the first T20I at the Sawai Mansingh Stadium. Men in blue won the thriller and moved up 1-0 in the three-match series. Suryakumar Yadav played a brilliant knock and top-scored 62 runs for India. Indian skipper Rohit Sharma fell two-run short of his 25th fifty in the T20I. New Zealand bowlers made a good comeback and gave a tough fight till the final over.

Rohit Sharma elected to bowl first after winning the toss. Bhuvnesh Kumar stunned the blackcaps by dismissing Daryl Mitchell for a golden duck in the very first over. Martin Guptill alongside Mark Chapman batted brilliantly and scored quick runs. Both played excellent shots and added 109 runs for the second wicket. Finally, Ravichandran Ashwin gave the breakthrough for India in the 14th over.

Ashwin scalped Chapman (63) and Glenn Phillips (0) in the same over and proved to be the game-changer. Shreyas Iyer took a good catch to send off Guptill (70) back to the dressing room. The blackcaps scored 164/6 in their 20 overs. While Ashwin and Bhuvnesh bagged two wickets, Deepak Chahar and Mohammed Shiraj finished with one wicket each.

Indian Openers gave a good start by scoring 50 runs in 5 overs. Mitchell Santner removed KL Rahul for 15. Rohit Sharma and Yadav played sensibly to add 59runs for the second wicket. India looked comfortable reaching the target, but Trent Boult made it tough by dismissing Rohit and Yadav in back-to-back overs.
India needed 10 runs in the final over. Rishabh Pant kept himself cool and smashed a boundary to finish off in style. The second T20I will be played at the JSCA Cricket Stadium in Ranchi on Friday.

Royal Challengers Bangalore eyes to edge past Gujarat Titans to stay in the playoff hunt
A look at India’s opponents in ICC World Cup 2019: Afghanistan
Nasir Jamshed banned for 10 years