ICC World Cup 2019: India will have to be wary of these Afghanistan players 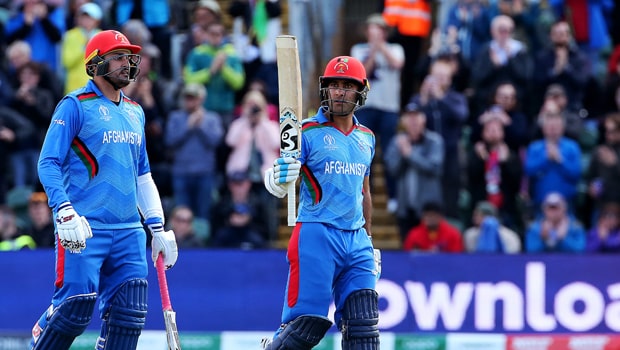 Everyone was expecting Afghanistan to cause a few upsets in the ICC World Cup 2019. However, we are midway into the tournament and Afghanistan are yet to even put up a proper fight. Winning seems to be a distant dream for them now. They have played five matches so far and have lost all five of them, that too by big margins.

They will go up against India in their next match and it won’t be an easy outing as well. But they would like to draw confidence from their previous encounter against India during the 2018 edition of the Asia Cup, when they tied the match riding on some inspirational all-round performances from their players. Now, let’s have a look at some of the Afghan players who could prove themselves to be a handful for India on Saturday.

Hashmatullah Shahidi: He has been the only Afghan batsman who has shown the temperament to tackle some of the best bowlers in the tournament. He has a total of 165 runs so far in the competition at a decent average of 33 and those runs include two gritty knocks of 59 and 76 against strong bowling units like New Zealand and England as well. The left-hander is pretty strong against spinners and will have an advantage while facing the Indian leg-spinner Yuzvendra Chahal in the next match. Afghanistan will have a good chance of putting up a fighting total on the board if they bat first and Shahidi goes on to play yet another big knock.

Gulbadin Naib: The Afghan skipper is the joint highest wicket-taker for his team with 5 wickets to his name in an equal number of matches. Moreover, he is the third highest scorer for his team with 100 runs under his belt as well. He picked up three wickets against England and also played an aggressive knock of 37 runs at the top of the order. This kind of individual performance has certainly boosted his confidence and he would be eager to do even better against India.

Rashid Khan: Rashid Khan had a forgettable outing against England as he conceded a total of 110 runs in his nine overs. His statistics in the tournament so far—three wickets at an average of 74.66 and economy rate of 7.03—doesn’t make for a good reading too. However, he was the one who helped Afghanistan to tie their previous encounter against India with a brilliant bowling spell of 9.5-0-41-2. That is his only source of confidence as of now and he should focus on this memory to bring out the best out of him in the next match.

Mohammad Nabi: The Afghan all-rounder has been silent after his brilliant spell of 9-0-30-4 against Sri Lanka. He hasn’t done anything of note since then and hence, he is due for a big performance. India should keep plans ready for him because the last time they met in an ODI, Nabi plundered 64 runs off 56 deliveries with the bat and later registered superb bowling figures of 10-0-40-2 as well. Afghanistan, as mentioned before, went on to tie that match with India and it wouldn’t have been possible without such a brilliant performance by Nabi.

Steve Smith replaces Kane Williamson as top-ranked Test batsman, Virat Kohli rises to fourth
Want to learn how to bowl the flipper: U-19 World Cup star Ravi Bishnoi
The BCCI has yet to pay its Indian women cricketers the World T20 money