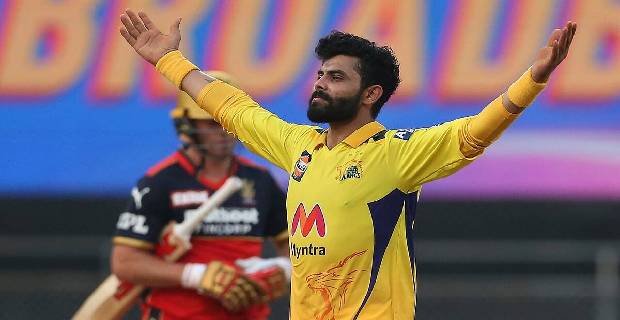 Chennai Super Kings defeated Royal Challengers Bangalore convincingly by 69 runs in yesterday’s IPL match. This is Chennai’s fourth consecutive win in IPL 2021. With this win, Dhoni-led CSK topped the IPL 2021 points table. It was an all-round performance from Ravindra Jadeja as he scored an unbeaten 62 off 28 balls. In the last over he scored 37 runs and completed his half-century. While bowling he also took 3 wickets for 13 runs in 4 overs.

Earlier, CSK captain MS Dhoni won the toss and chose to bat and scored 191 runs for 4 wickets. After chasing the target, RCB were able to score 122 runs for 9 wickets in 20 overs.
RCB’s 7 batsmen, including Virat Kohli, could not touch the figure of ten. Devdutt Padikkal was the highest scorer for RCB with 34 runs in 15 balls. Glenn Maxwell scored 22, Kyle Jamieson scored 16 and Mohammad Siraj scored 12* runs. Apart from Jadeja for CSK, Imran Tahir took 2 wickets for 16 runs in 4 overs. Shardul Thakur and Sam Curran were also successful in taking one wicket each. Ravindra Jadeja was awarded as the Man of the Match. In this match, both teams made two changes.

So far 27 matches have been played between CSK and RCB in IPL. Out of these, Chennai has won in 17, while Bangalore has been successful in defeating them in 9 matches. A match has been inconclusive.