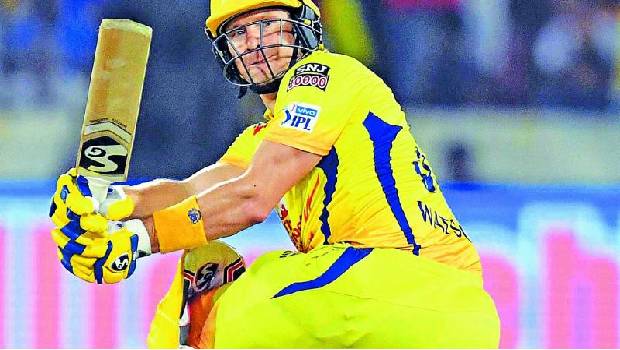 CSK made a tremendous comeback, recovering from three consecutive match defeats. On Sunday, they defeated Kings XI Punjab by ten wickets and registered their second win in five matches. With this victory, CSK move to the 6th position in the points table. In this Chennai win, openers Shane Watson (83*) and Duplessis (87*) shared an unbroken 181-run partnership for the first wicket.

Punjab for the loss of four wickets scored 178 runs in their 20 overs but Watson and Duplessis entered the ground with a totally different intention in their mind. CSK chased their target in 17.4 overs without losing wickets. Also, this is the first time in this season a team has won by chasing the target in Dubai.

Watson and Duplessis had the fourth-largest partnership for the first wicket in the tournament. With yesterday’s partnership, they have gone past the previous record of 159 runs held by Mike Hussey and Murali Vijay that they scored against Bangalore in 2011.

Punjab coming into bat, Rahul added 61 runs on the first wicket with Mayank Agarwal (26). Piyush Chawla gave CSK its first wicket by dismissing Agarwal. Jadeja sent Mandeep (27) to the pavilion in the 12th over. Rahul completed his half-century with a six as this was his second half-century of the season. Rahul and Puran for the third wicket shared a 58-run partnership. But Shardul dismissed Puran and Rahul for two consecutive balls in the 18th over.

Afridi had made a special record this day with Sachin's bat
World Cup 2019: India Beat Bangladesh By 28 Runs, Qualify For World Cup Semi-Finals
Ravichandran Ashwin to join Team India in England ahead of the warm-up game