A look at India’s opponents in ICC World Cup 2019: Bangladesh 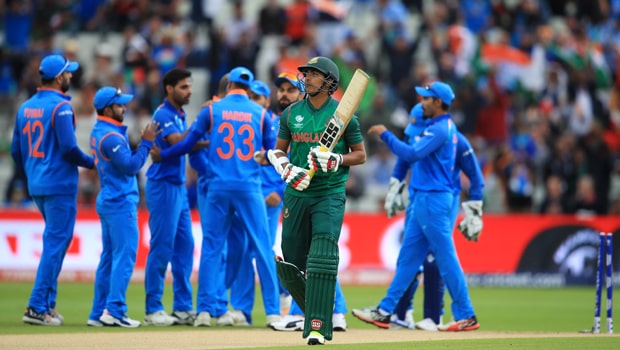 Bangladesh have grown from strength to strength as a team in the last five years. They had a memorable outing in the 2015 World Cup campaign when they qualified for the quarter finals for the first time in their history. They went a step further when they became one of the semifinalists of ICC Champions Trophy 2017. The Tigers punched above their weight on both of those occasions and they would be eager to do the same as they embark upon yet another journey in the ICC World Cup 2019. There will be a handful number of matches they would want to win during the course of the tournament. So, let’s analyze whether they stand a chance against a team like India.

Team overview: Bangladesh have an inspirational leader in Mashrafe Mortaza and he leads the team with heart and soul. The biggest strength of this Bangladeshi team is the balance between youth and experience. While experienced campaigners like Shakib Al Hasan, Mushfiqur Rahim, Tamim Iqbal, Mahmudullah Riyad, and skipper Mortaza himself, help the team in staying grounded on one hand, young players like Soumya Sarkar, Liton Das, Mustafizur Rahman, Mehidy Hasan and Mosaddek Hossain among others, add the much needed X-factor and exuberance to their team.

Their batting lineup is as strong as any other team. Tamim Iqbal is one of the best openers in ODI cricket at the moment and he is one of the reasons behind Bangladesh’s rise as one of the top cricket playing nations. Rahim, Shakib and Mahmudullah form a terrific middle order. In fact, twin centuries from Shakib and Mahmudullah against New Zealand were the reason behind their qualification to the semifinals of Champions Trophy 2017. Mahmudullah was one of the best batsmen during their World Cup campaign of 2015 as well. He had struck back to back centuries during that tourney. Add to this, aggressive young batsmen like Soumya Sarkar, Liton Das and Sabbir Rahman and you shall have a batting lineup capable of standing tall against the best of bowling attacks in the world.

Their bowling unit is not that bad either. They have two fiery pacers in the likes of Rubel Hossain and Mustafizur Rahman. Abu Jayed is a little inexperienced but he has the capability to surprise batsmen with his pace as is quicker than he appears to be. Mortaza on the other hand, provides the much needed control and stability to their pace attack. However, their spin department is a little underdeveloped. Apart from Mehidy Hasan, they have Mosaddek Hossain and Mahmudullah who are mostly part timers. And all three of them are off-spinners. So, Bangladesh lack the variety in their spin department in general. This is one area of concern for them. It is important to have good spinners on the flat tracks in England in order to have some edge over the batsmen. Bangladesh, however, doesn’t have it.

Major threats to India: It’s only Tamim Iqbal, and Mushfiqur Rahim to some extent, who have troubled India in the past. Those two will remain the threats to India this time as well. So, the Blue Brigade needs to formulate plans for getting rid of them quickly.

Predicted outcome: Bangladesh have a good memory of knocking India out of the 2007 World Cup. However, things have not been as easy for them ever since and it will require a lot more to get the better of a strong unit like India even if it is for one match. So, we are predicting a win for the Men in Blue this time around.