Brooks Koepka to miss out of US Presidents Cup Tournament 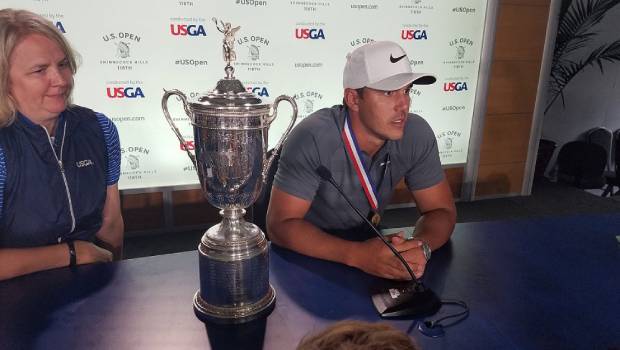 Tiger Woods the captain of the US President Cup, announced that Brooks Koepka will miss the participation in this President Club golf competition against International Team in Australia because of his knee injury.

Brooks Koepka secured the number one ranking position in the Official World Golf Ranking by winning back to back titles with U.S. Open in 2017 and 2018. Brooks Koepka’s win in 2019 PGA Championship is considered an important win because this pushed him to be the highest rank holder in the OWGR along with the conquest of CJ Cup in October 2019. This was his tough season as he fought with his fitness simultaneously since 2017.

He had to withdraw because of his left leg knee injury which he was already getting treated with. On the account of withdrawal from the US President Cup Tournament, Brooks Koepka confirmed that he gave his 100% to recuperation for the healing by visiting rehab regularly yet he could not be ready for the cup.

Tiger Wood’s words were, “When Koepka and I spoke, he’s disappointed that he won’t be able to compete,” also he said that he will be replaced by Rickie Fowler.

“I spoke to Rickie Fowler and he has agreed to join the U.S. Team. Rickie Fowler has played on a couple of Presidents Cup teams, was someone seriously considered for a pick and is well respected and liked by his teammates. I know he’s going to do a great job for us. We’re all excited about this year’s event. We’re ready to go” and so Tiger Wood’s confirmed. Inbetween Rickie Fowler was infected seriously with intestinal bacteria and was off playing games for a while.

It is noted that Rickie Fowler was not an initial pick by the captain but only because of Brooks Koepka’s medical condition he made the list. Brooks Koepka said that he is distressed for not representing red, white, and blue this time furthermore; he wished his teammates the best and to retain the President Cup Tournament for the USA.

Reanne Evans: Snooker is a perfect stage for women
Tiger Woods Urges Calm Over "Shocking" George Floyd Killing
Patrick Reed scripts a play that has never been witnessed in golf