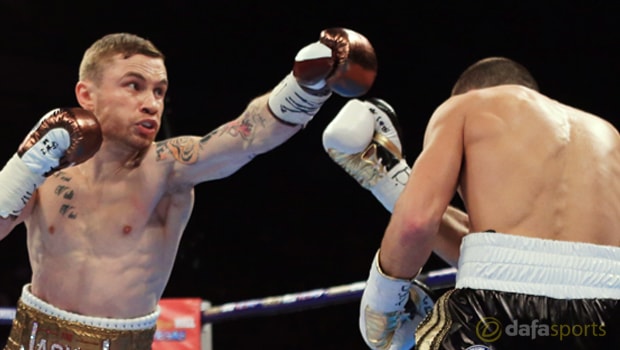 The 29-year-old is next in action on Saturday when he faces Mexican Leon Santa Cruz at the MGM Grand in Las Vegas.

The Northern Irishman took his unbeaten run to 23 matches by handing a first defeat to Santa Cruz by majority decision in New York last July and the two will clash again over the weekend.

Frampton is full of confidence going into the bout and is already planning much further ahead as he looks to set up a match with Selby.

The Welshman is also in action on Saturday night and will defend his strap against Jonathan Barros on the undercard in Las Vegas.

Selby has previously said he would love to take on Frampton in Cardiff at the Principality Stadium, however, the WBA champion insists he will be calling the shots and would rather see the fight take place on home soil.

“The Principality [Stadium, in Cardiff] is a great stadium but I want to fight in Belfast and I think I’ll be in a position after this fight, after beating Leo Santa Cruz, I’ll be the one calling the shots.”

Frampton can be backed at 1.73 to pick up another win on Saturday, while Santa Cruz is priced at 2.30 to come out on top, and the draw is available at 21.00.