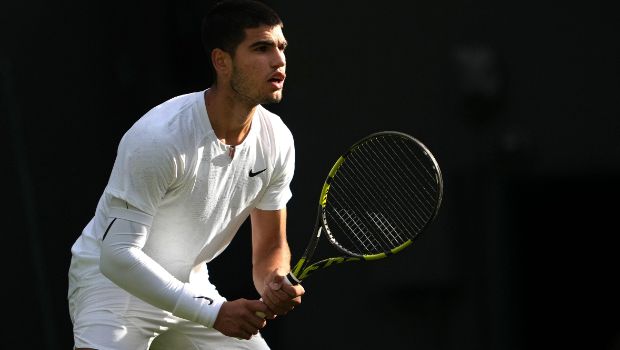 Carlos Alcaraz beat Casper Ruud 6-4, 2-6, 7-6 (1), 6-3 in the U.S. Open final to claim his first Grand Slam title. The Spanish teenager used his combination of moxie and maturity to edge past the Norwegian Ruud in the showpiece event. The 19-year-old Alcaraz delivered a master-class play to earn the U.S. Open crown and also became the youngest player to be ranked World No.1. The Spaniard who was playing in his eighth major tournament and just second at Flushing Meadows but already has attracted plenty of attention as someone considered to be the next big thing in men’s tennis.

Alcaraz opened his shoulders, played aggressively, and handled the pressure in the fourth set to claim his 51st tour-level win of the season. The Spaniard battled for three hours and 20 minutes to secure a memorable win. After registering a historic victory, an emotional Alcaraz dropped to the floor as he received roars of support from the New York crowd. He then climbed up to his player box to embrace his team, including Coach Juan Carlos Ferrero.

In the first set, both looked to play an attacking game, stepping inside the baseline on return to earn the first blow in the brutal baseline exchanges. Alcaraz and Ruud fended off two break points in their opening services games. But Alcaraz broke for 2-1 when Ruud struck a forehand wide. The third seed, who hit 13 winners in the set, consistently scampered around the baseline to turn defense into attack. He moved forward effectively to close points at the net.

Ruud began to hurt Alcaraz in the second set with his penetrating ground-strokes. The Norwegian saved a crucial break point at 2-2, before he broke Alcaraz in the following game to gain a foothold and belief. Ruud came out on top by reducing his mistakes and committed just two unforced errors in the set.

Alcaraz produced a dominant play to move 2-0 ahead in the third set. However, he started to show signs of fatigue, impacting his decision making which allowed Ruud to bounce back. But the Spaniard regained the momentum and finished points at the net to close out all-court rallies.

The Spaniard won 79 percent of net points across the three sets. Alcaraz went back to basics in the fourth set to finish the job. He pulled Ruud from corner to corner with his flat ground-strokes and stayed calm on serve to capture his historic win.