Top-seeds Daniil Medvedev and Naomi Osaka Advances to next round 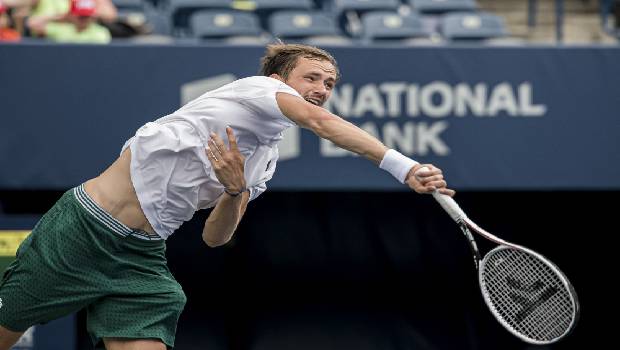 Daniil Medvedev secured a 6-2, 6-2 victory over Mackenzie McDonald in the second-round encounter of the ATP Masters on Wednesday. The World No 2 Russian player continued his winning streak against wildcard McDonald. Medvedev raced into the third round of the ATP event after a comfortable straight-sets win over the American.

Top-seeded Medvedev has won 16 of his last 18 matches, which started from the Mallorca Championships, a grass-court tournament he won in June. Before four days, he won his fourth ATP Masters 1000 title in Toronto.

Medvedev dominated the game with his powerful serves. He won 96 percent of his first-serve points to triumph in the game. The Russian star fought for every point and finished the game in one hour. Medvedev holds a special value for the Cincinnati Masters since he had won his maiden ATP Masters 1000 title here in 2019.

Daniil Medvedev said McDonald played well and any player who is in the second round of a tournament can play good tennis. He added that it’s not easy to go from winning a tournament to another in different conditions. Medvedev expressed his happiness as he won the game quite easily.

The top seed will clash with former World No. 3 Grigor Dimitrov in the third round. Both battled in the semi-finals of the 2019 US Open, where Medvedev won it in straight sets.

Naomi Osaka pulled out a 4-6, 6-3, 6-4 win over the American Coco Gauff at the Western and Southern Open on Wednesday. The World No.2 women’s tennis player Naomi Osaka fought back from being a set and a break down to win the first-round encounter against Gauff. Naomi Osaka, who advanced to the second round, is playing her first tournament on the WTA Tour since the French Open.
The 17-year-old teenager Gauff gave a tough fight to win the first set. Gauff successfully countered Osaka’s powerful game with heavy and high-bouncing shots. But she failed to continue the momentum and win the game.

After winning a hard battle, Osaka said it was great to be challenged by a tough opponent in a three-set match. Osaka added that she is much excited to play another match against a solid fighter.

Osaka, who won the Australian Open in February, withdrew from the French Open in May and skipped Wimbledon too for a mental health break. She made her comeback at the 2020 Tokyo Olympics and got eliminated in the round of 16.