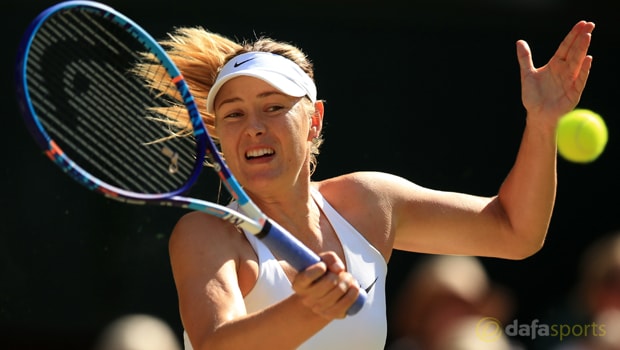 Maria Sharapova has confirmed she will make her return to action at the Porsche Grand Prix in Stuttgart on April 26 following a 15-month suspension for doping.

The 29-year-old was initially handed a two-year ban in March following confirmation she had tested positive for meldonium.

However, the former world number one saw her suspension reduced to 15 months in October following a successful appeal.

Sharapova is priced at 9.50 to win the 2017 Wimbledon title and will play her first professional match back on the circuit in Stuttgart, although the tournament starts two days before her suspension runs out.

The five-time Grand Slam champion, who won the Stuttgart title for three years in a row from 2012 to 2014, will not be allowed to attend the competition until the day of her first match.

The Russian will return to tennis without a ranking and will therefore enter the tournament as a wildcard.

However, despite having to work hard to re-establish herself in the sport, Sharapova insists she is excited to get back out on the court.

Sharapova said: “I could not be happier to have my first match back on tour at one of my favourite tournaments.

I can’t wait to see all my great fans and to be back doing what I love.”

She last played a professional match at the Australian Open 12 months ago with her next Grand Slam appearance likely to come at Wimbledon, where she has lifted the title once.

Sharapova has taken part in two exhibition events since being slapped with the ban but she will need to try and rediscover the form of 2015, which saw her reach the final of the Australian Open and the semi-final at Wimbledon.